How Asexuality is often overlooked in the larger LGBTQIA+ conversation 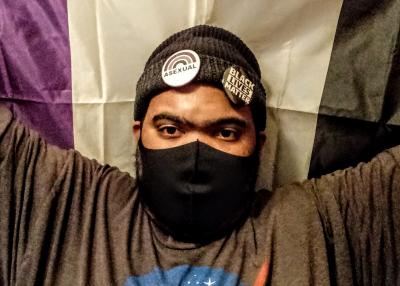 We recently sat down with Marshall John Blount, an Erie native and outspoken advocate for the Asexual community. A photographer, Blount founded Erieite Pride, where his positive messages and genuine appreciation for his city made him a well-known presence in the Erie community.

One of the things that Blount is happy to talk about is his asexuality. An important part of the wide spectrum of sexual orientations, The Asexual Visibility and Education Network (AVEN) website notes prominently that "an asexual person is a person who does not experience sexual attraction." An asexual person can be known as an "Ace" for short, or sometimes "Aspec" a portmanteau of "Asexuality" and "spectrum." With a wide variety of preferences, asexuals can also be aromantic, while some are not, and prefer to be in relationships.

Finding new ways to express himself, Blount started a YouTube channel in 2017. Moving from street scenes of Erie, he debuted his first Q&A vlog-style video in September of 2017. He now has more than 30 videos available under the banner of "Gentle Giant Ace." The moniker suits him will, as his large, six-foot-tall frame pairs with his extremely warm and friendly demeanor.

Nick Warren: In case people don't know you, can you introduce yourself?

NW: And what are some of your hobbies, projects, and organizations you're involved with?

MB: I do a lot of photography, mainly of street scenes. It caused me to explore new places and to also get into doing videoing scenes like sunsets. It also got me into doing me sharing my perspective on being Asexual in this world. So I turned my youtube channel which I had for city scenes into an Ace channel. I did not know how people were going to react but so far it's been overwhelmingly positive and has lead me to connect with fellow Ace people online and offline. Currently, I am on the board with Asexual Outreach, which is a non-profit organization that is about empowering and strengthening Ace communities across Canada and the United States. Between running my channel and being on the board. I am happily busy and excited

NW: Can you tell me more about the video series and some viewer reactions?

MB: The series started off with me nervously breaking down what Asexuality is and sharing my experiences, it was something I told my mom I wanted to do and she encouraged me to do it. The viewers responded better than I expected because I myself was just becoming comfortable with openly being out to some friends and family and I thought it was going to be like "What is this? or something extremely invalidating" but it was a positive experience. You do get the occasional ignorant remark here and there but it does not stop me from continuing my mission on pushing for visibility for the Ace community.

NW: Do you plan on continuing to do these videos for some time?

MB: As long as I live, for sure. I want to share my journey in this life while being Asexual while educating those who don't know about us. Getting in front of a camera is not easy for me but it is a great avenue to start a conversation.

NW: Can you tell me about when you first realized that you were asexual?

MB: Sure, I've always known something was different about me than the people who were around me but I never had the language to express it. That has been since I was a kid. I finally told someone (my sister in law, Deja) about how I felt about my sexuality and she helped me with learning the spectrum of sexuality so I can finally find where I was on it. And when I saw Asexuality and the meaning, I knew that was me 1000%. I felt so free. I came out around the age of 23.

NW: How did it feel when you realized this part of your identity?

MB: I felt free, happy, joyful, and I wish it was something I knew sooner. I was worried about the reactions from family, friends, and strangers. Overall, most have been positive and happy for me. It's really a journey that never ends and it's unpredictable

NW: What did you do to find a likeminded community of other Aces, both in Erie and in the online community?

MB: When I came out, I made a button I wore around the city to represent and see who else is Ace. I actually was able to find a few fellow Aces while being in public who spotted my button. At Pride and at a local protest. And as for online, I looked up several Ace groups to join and introduce myself to. That is how I mainly connected with fellow Ace folk. And I've gained a family during that process.

NW: What has this family taught you? What are some of the things you didn't expect to learn about the Ace community early on?

MB: They have taught me to never be ashamed of my Asexuality. To be fierce, to be kickass and to be loud. It's something that my parents have taught me already however meeting my fellow Ace folk made that statement even more eye-opening. And I'm forever grateful.

NW: How has this family been important to you so far?

MB: Extremely important. That is why I fight for visibility and representation for us.

NW: What are some of the most common misconceptions about the Ace community from the straight community? From the LGBTQ+ community?

MB: Well in general, the misconceptions are that we are broken, confused, that we are just straight people wanting to be oppressed, a phase, etc etc etc. These things are simply NOT true. This is why it's vital that visibility, education, awareness, and representation continues strongly. To fight Aphobia..

NW: Are those feeling common, or present in both communities?

MB: Yes, I've seen those comments come from both.

NW: How does asexuality fit in with the LGBTQ+ community currently? And how do you wish it fit in?

MB: We are LGBTQIA+. We fit in. We are LITERALLY the "A" in the acronym along with Aromantic and Agender. We are often treated as outsiders. I just wish people who gatekeep in the community would listen, learn, and STOP gatekeeping. How does being Aphobic help out the LGBTQIA+ community? It doesn't. It's harmful and dangerous

NW: Do you think this goes against some of the more "mainstream" LGBTQIA+ ideals?

MB: Gatekeeping always goes against inclusion and it's always a step backward towards progress. It's something that needs to go. As soon as possible.

NW: Overall, do you think the LGBTQIA+ community is accepting of the Ace community?

MB: Hmm. "Meh" is my answer to that question. There is just a long way to go. With increasing visibility, representation, and education I think acceptance is growing but we are not at the place where it should be at the moment. Progress has been made over the last couple of decades however we still get a lot of Aphobia. And unfortunately, that is also increasing. We will have to see over the next couple of years or so. A lot of activism/advocating is being done to combat misconceptions and hate so I do have hope for our future.

NW: To pivot a bit, as a longtime voice in the Black Lives Matter community, can you speak to the importance of intersectional activism?

MB: Intersectionality is so important because it shows that our communities are not a monolith and they often meet to make us who we are. And that should never be left out of the conversation of the movements today and tomorrow.

NW: How do you hope the conversation will look as things begin to progress?

MB: I hope that people listen more. And "embrACE" us And I hope that less and less people try to silence us. I hope the conversation of the future is less tense and more welcoming. The more gatekeeping declines, the better it will become.

NW: Maybe this sounds like an abstract or basic question, but how is someone's identity important?

MB: It's a part of who we are. And it also impacts how a lot of us navigate the world we live in. Some people have privilege while some don't.

NW: Thank you so much, Marshall.

MB: Thank you. I just wanted to add that Asexual people are valid and we deserve to be heard and to have our humanity respected. Thank you to my parents for supporting my activism and having my back on this journey and shoutout to the Ace community from Erie and around the world.