The Cleveland native talks about his new album, moving to Paris, and having a lot of luck with January.

by Alex Bieler
View ProfileFacebookTwitterInstagramGoogle+RSS Feed
October 2, 2013 at 7:08 AM 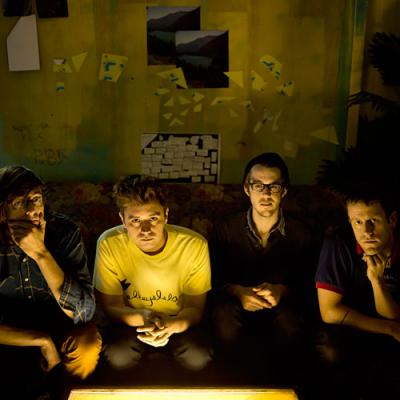 Having grown up in Cleveland, I still root for up-and-comers coming from Erie's fellow Lake Erie city. So when I happened upon a band called Cloud Nothings a few years ago, I started paying attention.

Led by fellow Clevelander Dylan Baldi, the group impressed me with their snotty pop-punk, still rough around the edges but plenty of promise shining through the energetic tracks. Then, in January 2012, Baldi surprised Cloud Nothings fans with "Attack on Memory," a dark, primal album that left behind the sugary sweetness of past tracks. It wasn't long before the indie music world caught on, and by the end of the year, "Attack on Memory" landed on several Top-10 lists, including ours.

I happened to meet Baldi at his most recent show in Cleveland, and after a few missed calls, we were able to chat about his upcoming album and how the biggest critic he needed to impress was himself.

Alex Bieler: Before we really get into this interview, I have to ask: Is that you howling on your voice mail?

Dylan Baldi: Um… yeah, probably. I think one day I just screamed into it. It's been a long time.

AB: When I called, it definitely took me a little bit by surprise.

DB: Yeah, maybe I should make it a little more professional.

AB: Nah, you don't need to do that. It's more fun than a normal one. So, are you currently touring? I heard you were recording a new album soon.

AB: I find it crazy that you live in the same town near Cleveland [Middleburg Heights] where I lived for nine years of my life and where my parents still live.

DB: I live there now, but I'm actually moving in a couple of days to Paris.

AB: Paris? What prompted that switch?

DB: It seemed like a good idea. I have more friends there than I do here at the moment.

AB: What about Paris really struck you as your kind of place?

DB: It's just a nice place to be. It's relaxing no matter what part of the city you're in.

AB: Do you speak French?

DB: A tiny, tiny bit. I'm learning at the moment.

AB: Are you recording your next album over there or will you come back to the States for that?

DB: It's going to be in New Jersey.

AB: Your last album "Attack on Memory" was a major shift in Cloud Nothings' sound. Should people expect another change with this next album?

DB: I think it's definitely a change. It's not as big of a change as going from the self-titled record to "Attack on Memory," but there's a difference, for sure. It's a little less angsty, a little more grown up.

AB: Were there any musicians you were really drawing from, or is this a natural evolution?

DB: It's nothing I was really listening to; I've just slowly become more confident as a songwriter and comfortable making a song that sounds like something that I would like. That's what I'm really doing at this point, just making songs that I like, and since I like them and I hope other people would like them too, because I'm confident in my tastes.

AB: So how old are you now?

AB: You started Cloud Nothings when you were 18. Now at 22 you were already on several publication's top-10 lists, so is it something where you've realized that it doesn't matter what age you are to do this?

DB: It's not really so much the age as that I was uncomfortable personally with the way I was writing songs and thinking I could always do better. Being put on people's year-end lists is great, but it didn't make me feel like I knew what I was doing. I had to keep writing and practicing until I thought in my head, "Yeah, this is good." I'm more confident in myself not because what other people have said but just because I've slowly gotten better at these things.

AB: Would you say you're more confident on stage as well?

DB: I guess so. I still don't talk much between the songs, but we're a better band than we were a couple of years ago.

AB: When I last saw you play at the Beachland Ballroom, you didn't play anything that came out before "Attack on Memory." Do you feel like you've outgrown those songs, or is it just a matter of them not fitting in with the new material?

DB: Even hearing "Attack on Memory" is a little awkward for me, just because I don't like listening to myself. The reason we don't play them is that it really wouldn't make any sense within the set that we're doing now.

AB: With your new style of singing, do you ever get afraid your voice won't hold up?

DB: You mean yelling? [Laughs] I honestly don't know how I can do it. When we first started touring ["Attack on Memory"] I was really nervous that my voice would just stop working one day, so I was drinking a lot of tea every day, but then one day, I realized that it just happens, and I can just do it without having to worry about losing my voice. Let's hope it stays that way.

AB: Being from Cleveland, did you ever travel to Erie?

DB: I've actually been to Erie once. My cousin lived there for a while and worked at GE. I came up to visit her. I don't remember it too much.

AB: Well, with your move to Paris and everything else, do you have any big plans for the future?

DB: We're just going to take it one record at a time. Making big plans for the future has never really been my thing, so I tend to see what happens and where everything goes.

AB: Do you have an expected release date for the new album?

AB: You've had a lot of luck with January.