by Nick Warren
View ProfileTwitterInstagramRSS Feed
January 2, 2019 at 9:45 AM 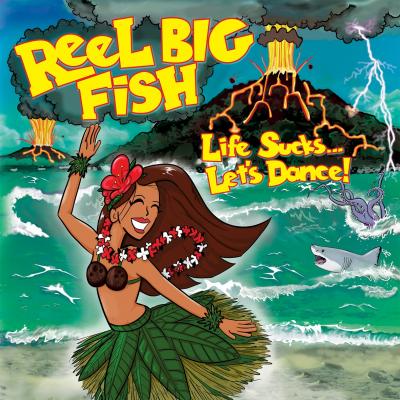 Even at the apex of third wave ska's popularity in the 1990s, Reel Big Fish barely seemed convincing. Forever feeling like a parody of then-modern ska bands rather than something real, they did hit all the marks, and for better or worse, defined the movement in many people's eyes. They're bright, bold, and brash, combining sarcastic fun with incredibly tight, coordinated, turn-on-a-dime musicianship — a gifted class clown deeply burdened by ADHD. If you happen to remember cuts off their 1996 album Turn the Radio Off like "Beer," "Everything Sucks," and "Sell Out," you'll know just what to expect. For the sextet's ninth studio album in 23 years, it seems like the band is still doing exactly what they want, and that energy turned out to be authentic after all. At first listen, the album drops more eye-rollingly acerbic uptempo ska punk, forgettable and barely forgivable. Starting with "Ska Show" (a simple song we desperately needed in the late '90s), the flipside of the record redeems itself by slightly shifting down in tempo for track after track of warm, funny, sincere songs like "I'd Rather Get It Wrong." — Nick Warren