A tribute to Tony Scanzillo, who passed away this week at the age of 95. 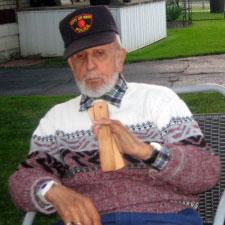 I remember Tony as far back as 1970 when he would cut hair at his shop on the northwest corner of Fifth and Wallace Streets.  Typically, customers were waiting their turn in the barber's chair and we would often pass by after school on our way to whatever trouble that would be on the agenda on any given day.  We were in our mid-teens and Tony didn't much care for the fact that we would hang around in front of his shop, smoking and generally being at least semi-obnoxious.  Knowing that we irritated the rather nice man, we sometimes also provided antics and off-color gestures to his patrons through the large glass windows of the shop.  Sometimes, Tony was so busy cutting hair and sharing conversation to even notice our presence, so we would feel compelled to ratchet it up, if you will.  There's nothing quite like three or four young men dropping their jeans, turning around and displaying some 'pressed hams' on the glass window, much to the chagrin of his patrons, which would generally cause Tony to step outside and finally intervene at which we would take off running and laughing hysterically.

During this same period, we always walked to school -- which was the old East High on Atkins Street – and would sometimes notice someone running around the track that surrounded the football practice field.  At lunchtime, we would often head over to East Avenue to get some lunch and have a smoke and there he would be, still running around the track.  I would usually just stop and watch him and wonder what kind of determination and ability it took to run around that track all morning long and not least of all, the guy must have been 60 years old.  That guy was Tony the barber.  He saw us, but likely didn't recognize us because the vantage point was different (remember the pressed hams).

Fast forward a few decades and I found that I now lived across the street from Tony near 30th and Perry Streets.  He wasn't running marathons anymore, but he was nearly 90 years old and walking to and from the barbershop on 5th and Wallace just about every day.  He had his walking stick, his hat, scarf, raincoat, and pepper spray (once bitten by a dog on the daily sojourn) and off he would go.  People along his route knew him and talked to him as he made his way to and fro.

This is when I got to know him.

His past and his life were remarkable.  He had been there and done that and pretty much everything else in between.  He had 'rode the rails' as a wanderer and he had won the coveted Bronze Star for valor while fighting in the Battle of the Bulge and at Remagen in Germany in World War II.  He had married a wonderful lady named Betty who I had previously met, but she passed away right after I moved in and Tony was now alone.  He may have lived alone, but he never really was.  People came by every day to visit him and after a few more years, he decided to close the barbershop and cut hair for his closest customers right at the house on Perry.

He still drove a car, cut his lawn and did most everything else as well.  One hot summer day, I thought that I would do him a favor and go over and cut the grass for him, since it was getting fairly high.  While I was in the middle of mowing the back yard, he came out and wanted to know what I was doing.  I explained that since it was so hot, I thought that I would help him out, but that didn't sit very well because he told me that if he needed help, he would ask for it and to take a hike.  After all, he wasn't quite dead just yet.

He wouldn't necessarily turn down help with the snow, however, because he couldn't quite handle that.  He knew where the line was drawn.

One summer, my wife, Mary and I came back from Nickel Plate Mills with some flowers and vegetable plants and brought a hanging plant for Tony's front porch, which he kindly accepted.  A little later, it was warm and sunny and Tony was out on his porch playing 'the bones' (slap sticks) or his harmonica and I sauntered over to chat.  Since it was pretty warm, I asked him if he would like a cold beer, but he informed me sternly: 'alcohol only leads to gambling and you know that gambling leads to drugs, so I have to say no, thanks'.  Surprised, I reminded him that he was 90-something and that I didn't think he would head down the slippery slope after a cold Miller, but he was adamant – 90 or not, no alcohol.

When we had our summer picnics, we would sometimes invite Tony over to our backyard for a burger and he would gladly come along and always brought the harmonica because he felt he had to provide some entertainment, and that, he did quite well.  He would play, then tell a story or two and play some more.  No beer, though.  No sir.

One day, I came home from work and we had just had a new cement walk poured that morning and Tony was sitting in a lawn chair next to the dogwood tree in our yard.  I asked him what was happening and he said: 'wanted to make sure no one came around and messed up that nice concrete job, so I watched over it when they left this morning and now it's your shift'.  That was Tony.

Sometimes, he questioned occasional visitors to our house when we weren't at home.  For instance, Mary's brother, John stopped one afternoon to drop off a cake pan at the front door and Tony came over and wanted to know who he was and what he was doing there.  John explained and he said: 'well, OK then'.  Another Time, Mary's son, Brian came home from State College and when he arrived, Tony came across the street and asked him what he wanted.

There were some things that Tony sometimes needed help with, like, when he came over and asked Mary to cut the stitches from his eyelids after his surgery healed.  She couldn't quite do it, so he decided to go elsewhere.  Having a tricky old phone and cassette tape answering machine, we picked up a cordless phone with a digital answering function and set it up for him.  Whenever anything didn't work quite right, since we provided it, we were also responsible for its operation. Tony would sometimes come by and let us know: 'your phone doesn't work right' and off we would go to rectify the situation.

If you didn't see him on the front porch, you knew he was usually OK because the baseball game would be on TV and you could hear it outside.  We tried to get him to go to some Seawolves' games with us, but he liked it 'better on TV.'

Tony was one of the most interesting people I have ever met.  Often funny and sometimes a little frustrating, he was always completely likeable.  He once commented that someone had a 'stupid brain' and we often borrow that phrase even today, whenever it may apply.

Just over a year ago, Tony moved out and went to stay with his daughter Ruth Ann, so she could keep a better eye on him.  He went on to meet his maker on Saturday, April 9, 2011 at age 95.  Sadly, he won't be watching over our house anymore.  At least, not that we know of.  We will miss him.

I never revealed to him that I was one of the kids that provided the 'pressed hams' at the barbershop on Fifth and Wallace.