Review: The Curious Incident of the Dog In the Nite-Time

The Playhouse does not simply tell this story it immerses you in it. 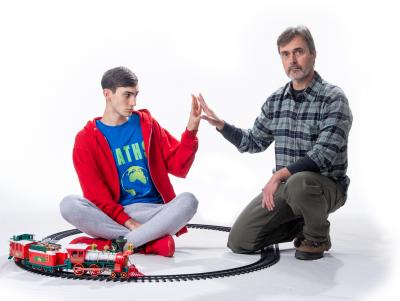 The lights dim, the stage fills with a massive starscape, and then begins one of the most breathtaking theatrical experiences of my life. Lights, sound, and fantastic performances truly breathe life into "The Curious Incident of the Dog in the Night-Time".

The Tony award-winning play by Simon Stephens, based on the award-winning novel by Mark Haddon, opens with a murder. A dog has been killed and teenager Christopher Boone (Luke Bongiorno) takes it upon himself to solve the mystery. We follow Christopher, a young man who has an unnamed autism spectrum condition, and loves space and math, as he travels the streets of his town in search of the culprit. His journey takes an unexpected turn, and a family secret is unlocked that will forever change his life.

by Hannah McDonald10/23/2019, 1:30 PM
The Erie Playhouse takes on The Curious Incident of the Dog in the Night-Time

The Playhouse does not simply tell this story, it immerses you in it. We are taken into Christopher's world, with truly astounding lights, and projected animations by designer Sam Brady. The set is filled with hidden doors and cupboards allowing the actors to pop in and out from every space imaginable. Dominic Del Greco's sound design during the second act is visceral and during the opening of the second act as Christopher travels to London we are given a sensory experience like no other.

While the technical aspects of the show truly create Christopher's world, enough can't be said about the production's performances. An outstanding ensemble (Teni Hodge-Siano, Michael Burns, Bev Walz, Michael Weiss, Micheal Watcher, Samiar Nefzi and Janeida Turbi) takes on roles of those Christopher encounters on his journey. Many of which hardly leave the stage, and seamlessly jump from character to character with the ease of a chameleon changing colors. Karen Schelinski – with quiet grace – plays Christopher's teacher Siobhan. Two excellent performances from Krista Perry and Ken Brundage, who play Christopher's parents, help to give the play a depth not often to be found. In the final moments of act one between Christopher and his father, between the silences, and a masterful speech by Brundage, I had to remind myself to breathe. The weight of this massive production falls on the shoulders of Luke Bongiorno's performance of Christopher. His work is excellent. He handles the role with great understanding, never allowing it to be a stereotype or cliché.

Director Kate Neubert-Lechner, and the entire cast and crew have created something truly special. The cosmos is made up of millions of stars; a lifetime is made up of millions of experiences. Do not miss out on this experience. "The Curious Incident of the Dog in the Night-Time" at the Erie Playhouse will take all of your senses on a journey that you'll remember for a lifetime. – J.D. Mikikowski

The Curious Incident of the Dog in the Night-Time

Performing Arts
11/17/2019 at 2 PM
Erie Playhouse, 13 W 10th St, Erie, PA 16501
The Tony Award-winning THE CURIOUS INCIDENT OF THE DOG IN THE NIGHT-TIME has been seen by over 3 million people in 9 countries around the world, most recently completing a smash-hit UK and Internat...

If you would like to submit your own theatre reviews or other writing up for online (or print) consideration for the Erie Reader, go here.