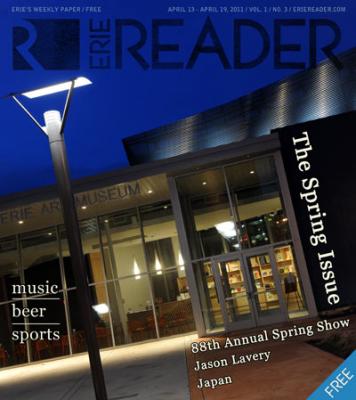 "I have two children. A daughter who's a teenager, and of course doesn't love anything about what I do – and a son, who, on one level, thinks my art is just a natural extension of me, and on another, gets excited and sometimes says, 'why don't you just knit up a costume and we'll play this afternoon.'" Mark Newport laughs. "If only it were that easy."

The Juror
That was part of a recent conversation I had with Mark Newport, Juror of the 88th Annual Erie Art Museum Spring Show. For those of you who are not familiar with him, Newport is a multi-disciplinary artist who produces hand-knit costumes of familiar superheroes we all know, such as Spiderman and Batman, and even those we don't know—ones with titles such as Sweaterman, Every-Any-No-Man, and Bobbleman. He also creates prints, photographs, and performance art, often including his knit costumes.

I actually had the opportunity to have dinner with him. We met up at the Erie Club, amongst a few friends of the arts, including the Erie Art Museum's Executive Director John Vanco, and Kelly Armor, the director of education and folk art.

Vanco thought it would be a fitting opportunity to invite the board and some local fiber artists to meet with him. His immediate impression ended with him being asking to leave the Erie Club before he even stepped in the door. He happened to be wearing jeans.

I smile as I write this because anyone who has any understanding of the Club knows how strict this rule is: no jeans. Period.

But luckily Newport wasn't bothered in the least. And luckily his room was close by. It's definitely not been my first personal encounter with this—I guess we're remiss in the shared thinking that everyone knows this rule—even out of towners.

Although there was little chance to explore his background and history during dinner, I found that while his creations and art strays from the norm—it's both creative and intriguing—I sensed his personal life was very much a white picket fence story.

Beautiful family, good friends, and great kids—even if they have mixed feelings about his art.

Speaking of creative and intriguing – Newport actually finds inspiration in the comic book superheroes of his youth. His favorite? "Batman is by far my favorite superhero—this is mostly because he's human. He got his powers through his riches and his training—he's a self-made man and vigilante hero."

Newport was brought to Erie—he hails from Bloomfield Hills, Mich.—because of a connection made by Lisa Austin, a professor in the Art Department at Edinboro University of Pennsylvania. Austin suggested Newport to Vanco, and they both agreed he'd be a great juror.

"Lisa found me on the Internet, actually. Everything was coordinated through email, and I didn't formally meet either her or John Vanco until I got here," Newport explained. "It still amazes me the connections the Internet helps to create."

Newport's works explore ideas of masculinity, bridging the gap between his childhood experiences and adult understanding. His work has been exhibited throughout the United States and Canada.

In addition, his works are included in the permanent collections of the Whitney Museum of American Art, The Renwick Gallery of the Smithsonian American Art Museum, Microsoft, Progressive Insurance, and many other galleries and locations. He is currently an Artist-in-Residence and Head of Fiber at the Cranbrook Academy of Art. He earned his BFA at the Kansas City Art Institute and his MFA at the School of the Art Institute of Chicago.

So what makes one get into this refined field anyway?

"I originally got involved and worked in textiles and fiber when I was an undergraduate at Kansas. I had a roommate that was taking an elective class in the fiber dept," Newport said. "It turned out that I enjoyed that more than painting. As for the costumes, I had already been using comic book imagery in embroidered pieces and they predated the costumes. I was interested in pop culture and how it related with textile production and imagery. And then of course they are superheroes, and I'm a dad. So, it was another dimension of 'protecting' those I loved around me – especially post 9/11."

The Show
The Erie Art Museum's 88th Annual Spring Show is, as you now know, a juried exhibition that calls for works from artists within a 250-mile radius of Erie. One thing you may not know though is that the show has a unique component. It is one of the few that is actually juried through the physical artwork instead of digital slides.

According to Carolyn Eller, director of marketing and development for the Museum, "This is a very unique and rare process in this day and age. We bring in an unbiased juror from out of town, and he physically judges the work. It's my favorite part of the show – seeing the pieces paraded in front of him or her and watching them get whittled down."

Vanco emphasized the community elements of this kind of process as, "a great way for the staff to keep up with what's going on in the regional art scene. It brings artists and their friends and spouses into the Museum, and involves local artists in a way that sending in a disk just doesn't."

So, what was Newport looking for as a juror?

"It is definitely a 'gut' thing," he said. "What I tried to do though was look for work that reflected the artist's view of the world and whether there was something unique or interesting or personal as to what I perceive the artist was envisioning.

"I tried to find what showed the artist's passion and what was different; this is all very subjective. Very. Especially with this show because I was dealing with works that were actually there. I had a much better read about what they actually do—especially if they submitted more than one piece, therefore hoping to get a better idea what the artist was actually thinking about."


Grab a FREE copy at one of our distribution points to read the rest of the interview.