Paisley is bound to deliver an unforgettable night of entertainment to those willing to listen. 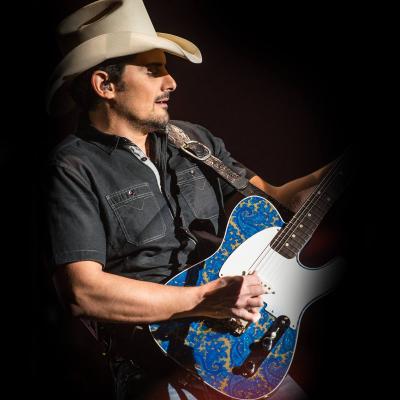 This March, thousands of Erie natives will fill the Erie Insurance Arena for one of the biggest concerts of the season: Brad Paisley's Weekend Warrior World Tour.

A country superstar, Paisley's talents surpass that of the typical singer-songwriter and find themselves closer to that of an all-around entertainer. Paisley released his debut, Who Needs Pictures, in 1998, and in the years following he quickly became known for smash country-radio singles like "I'm Gonna Miss Her" and "Whiskey Lullaby." The performer released his latest album, Love and War, last April, warranting a world tour that just so happens to be stopping in Erie. Erie Events Communications Coordinator Brandon Boyd explains the role of concerts like Paisley's within the Erie entertainment landscape.

"We all know Erie," starts Boyd. "Everyone works hard and does what they can to make this city such a great place ... we like to say that 'It's all right here,' and what we mean is that any option you could want, we have right here in our region."

According to Boyd, bringing events like this to town is healthy for local businesses and music fans alike.

"There's always going to be options in other places and we know that," continues Boyd. "Our goal is to bring such top-quality events to Erie that you wouldn't even consider going elsewhere...There's excitement when events come to town — ones you've maybe seen online or on television or heard on the radio — and for them to come directly to us is beneficial for all. It only works to expand the Erie region and what it has to offer."

There's a reason a performer of Paisley's caliber is able to pack a venue like the Erie Insurance Arena, and that's largely due to the amount of effort put into his stage show. Whether he's touring halfway across the globe or right in the middle of our city, Paisley is bound to deliver an unforgettable night of entertainment to those willing to listen. — Aaron Mook