An entrepreneurial case study with the ReCAP MakerPlace founder 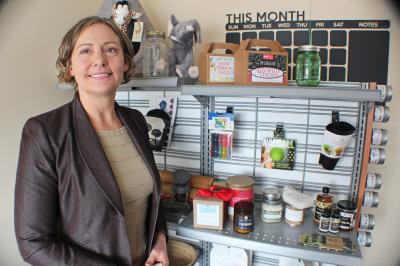 Nick Warren
Karen Rzepecki, founder of ReCAP Mason Jars and the idea incubator MakerPlace, stands before a selection of products sheu2019s helped local entrepreneurs get off the ground.

Statistics show that 48 percent of entrepreneurs grew up seeing their family run a business of their own. For Karen Rzepecki, founder and CEO of MakerPlace Mason Jars Company — this was no different. Rzepecki's grandfather owned a five-and-dime store, her father was a farmer, and her mother was an artist who owned a small gallery in Somerset County. And yet, even with it in her blood, her entrepreneurial career didn't start right out of college. Instead, she went the corporate path and served nearly 30 years at GE Transportation.

When asked if transitioning from corporate life to entrepreneurial life was scary, Rzepecki stated, "it didn't scare me in any way. My family was very entrepreneurial. It wasn't unique to see someone running a business."

Rzepecki's first idea, as many of us now know, was for an attachable lid for Mason jars that would be easy to pour from and reuse. "I use Mason jars to make salad dressings with herbs from my garden. At the time, there was only the metal lid with the ring, and it frequently made messes. And as such, I wanted to create a better solution."

And the idea was born.

Rzepecki would go on to create and patent a BPA-free, FDA-approved "no break" plastic multi-purpose cap; however, she did not have a background in plastics. But what she did have was all the other necessary tools, including the perseverance and the connections.

"Creating the right team is so crucial. I knew many individuals in the tool & die industry; I continued to create connections throughout and I put together the right team to manage the resources."

Once she had her prototype and design, she tested the market on the now prevalent crowd-funding platform Kickstarter. "At the time, Kickstarter had only been around two years and required an application process. I did everything that was required — and they initially sent back a rejection letter."

But that didn't stop her.

As luck would have it, her son just happened to know the founder of Kickstarter. "I could have done it on my own, but he made the introduction, and ultimately they got back to me. Originally, they thought the product was already being sold in stores. Once they realized it wasn't, they were very excited." The response was overwhelmingly positive. Her 2011 launch saw $16,325 pledged (well above her $10,000 goal) and 824 backers.

It is said that luck is a matter of preparation meeting opportunity. And the timing for Rzepecki's launch was impeccable. "Today, the crowdfunding game is much more challenging. Now, it's almost impossible to get seen on Kickstarter. Back then you could get influencers excited merely by giving them a product. Now, they are much more savvy and looking for ways to monetize their business." Rzepecki also entered in the Innovation Erie competition and won. "I received the grand prize and between that and the Kickstarter funds, that was enough for me to tool up."

However, she still had a bit of a learning curve ahead. "In the process of bringing the product to market — I never had a position dealing directly with consumers. All of my experience at GE was business-to-business — so this was foreign to me." She reached out of her comfort zone and started networking. "I started going to trade shows. There was a major one in Chicago and there was an area for small companies like us, an investors corner. The folks in that corner, around 35 or so of us, were all so excited for each other. They were engaging and shared stories and we were all rooting for each other. When you walked outside of that area, the bigger brands didn't share the same feelings. They didn't want to talk, and we were not welcome in their space."

Today, Rzepecki continues to expand upon her products and the recently developed masonjars.com — an online makerspace. "With changes in the marketplace, outlets like Amazon and Etsy have become increasingly competitive." She wanted to have a marketplace to aid in this experience — however, not for product launches, but rather a product accelerator. "I am looking to work with original makers that have a product and brand and processes in order — they know how to fulfill orders."

Rzepecki's focus is to continue to tap into the collective nature of entrepreneurs. "The collaborative spirit is contagious. I look at other makers on our site and think about how I can use their products with mine and make a better solution." And she is thrilled with the results to date. "We launched in June and it is performing exactly as we anticipated. The more we can build broader solutions, well, everybody wins. This is not a zero-sum game."

Currently, Rzepecki has 35 sellers in various stages of onboarding. And she's already looking at her next venture. "We are looking to bring this entire ecosystem full circle. The next step for us is to build out the American version of Ali Baba." Because Asian manufacturing has exploded, it's easier for the U.S. to engage in Asian manufacturing than it is in the U.S.A. "The needs in the U.S. are so fragmented and regionalized — if we can help create the view that American manufacturing is still very much alive, I think we can change that perception."

As for her best advice for those looking to get into the entrepreneurial arena? "Do your research. If you want to be taken seriously, don't just have an idea and start asking people without looking into it. Everybody is busy. Do your homework before you start approaching others. When you get some of the legwork done ahead of time, you'll find you'll get a ton of help."

At the Center of the World

by Nick Warren11/21/2018, 10:15 AM
How World of Music continues to pull the Erie music community together
Karen RzepeckiMakerPlaceErie businessessmall business