Indie rocker Timothy Showalter talks about his new sound, Dan Aykroyd, and taking the critically-acclaimed album HEAL on the road.

by Alex Bieler
View ProfileFacebookTwitterInstagramGoogle+RSS Feed
August 6, 2014 at 5:15 AM 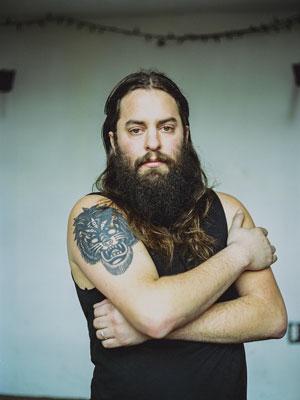 It's been a good summer for Timothy Showalter. The man who performs as Strand of Oaks released his new album HEAL in June to critical acclaim, including a five-star review in the Erie Reader. However, times haven't always been easy for the Philadelphia-based musician, a topic that comes up often on HEAL, a personal account of Showalter's struggles. Gone are the folk-leaning fantastical stories from past albums, like the tale of The Blues Brothers star Dan Aykroyd seeking revenge on John Belushi's dealer on Pope Killdragon's "Daniel's Blues," replaced with honest assessments of Showalter's struggles set to electric guitars and synths. Still, HEAL doesn't completely dwell in depressing territory, instead focusing on how music helped Showalter persevere during troubled times. Strand of Oaks played at Cleveland's Beachland Tavern July 31 and will be at Pittsburgh's Club Café Tuesday, Aug. 12 as part of an international tour, but Showalter had the time to chat with the Reader about HEAL, Dan Aykroyd, and what he's listening to.

Alex Bieler: How has life been since HEAL came out?

Timothy Showalter: It's been shockingly awesome. I'm always cautiously optimistic about stuff. I knew I loved the new record – I loved the way it sounded, and I'm super proud of it, but there's no guarantees, especially in music, that people are going to like it and embrace it. I think that's why it feels so good right now, because I wanted people to like this record, and I put everything that I had into it and to see it return with not only critical acclaim but also record sales and all of that, it felt validating. It's been a really good month.

AB: HEAL is such a personal album. How does it feel playing these songs for the public?

TS: I hate to sound cliché, but it feels like its helping this journey of healing. I was nervous and thinking about if I was going to be able to play these songs live every night. Every time I play them, I feel better, like I'm getting closer to whatever I'm looking for. The songs are very emotional to play, but not in a depressing way. It's triumphant, like I'm going to play through this and I'm going to play my guitar as loud as I can. With people in a room, it's – I love playing live – but now it feels even more important. I think it translates to the audience that we're all trying to do something together. I'm always so humbled whenever anybody buys a ticket. This is their Tuesday or Friday or whatever night of the week and people are deciding to pay their hard-earned money to come and see my band. If I ever find myself taking advantage of that, I welcome anybody to come punch me in the face and kick my ass for it.

AB: I love that while HEAL is so personal and has a sadness to it, it's triumphant and about how music helps you overcome struggles in life.

TS: That wasn't necessarily my plan, but it just naturally happened. The record had sad elements to it, but – and you nailed it on the head – it's about music and the fact that it does save people.  It's almost like a love letter to music. That's the reason why I got through my struggles, whether it was listening or playing or recording.

AB: There's a Jason Molina tribute on the album called "JM," which was one of the musicians you listened to. When you listen to music now, do you typically go back to Molina and Smashing Pumpkins, or do you listen to a lot of newer releases?

TS: When I'm not playing music, I constantly have music on. I was just listening to this new album by a band called Hiss Golden Messenger. It's fantastic. It hasn't come out yet; I'm lucky enough to have an early copy. I'm constantly impressed by music. I still listen to Songs: Ohia and I still listen to Pumpkins, all that classic stuff, but I really made the conscious effort to listen to music happening now. If I ever have kids some day, I want to preserve the legacy of my peers and to have them know that classic rock is not just relegated to the past. I think there are records being made now that will be classics in 20 years that people will look at like masterpieces.

AB: Any other favorites so far this year?

TS: I love Sharon Van Etten's new record; that's got to be favorite of the year. I'm blown away by it. I love the new Sun Kil Moon record Benji.

AB: Yeah, that's up there as one of my favorites.

TS: It's just a powerful record. Damien Jurado did his best record this year. I know it came out last year, but I still can't stop listening to The National's latest record. That to me is one of the best records made in recent memory.

AB: Speaking of people who have been doing great work recently, you worked with John Congleton on your new record.

TS: He actually mixed it. It was an honor. I've been aware of his work forever and this record would not have been what it is without his touch. He does things with drums and guitars that I have no idea how he did it. I know a lot about recording, but I'm not that good. He has this ability with a lot of his releases to just pull something out of songs that most people can't. What he did with my record that I was most impressed by was it was a more dense record when we sent it to him and there were a lot of different parts, and his vision was to strip it away to its bare essentials and then turn it up as loud as it could go. Take away all of the unnecessary things and just push what's left.

AB: When you say it like that, I immediately think of the beginning of "JM" when it uses silence to its advantage before it just explodes.

TS: I play the guitar parts and mostly everything on that record, but could not have guessed how big it could have sounded. The first that I heard it on headphones, I probably screamed "holy f—-" so loud that the neighbors called the cops because they thought I was getting robbed. It was like "this is the most incredible thing I've ever heard!"

AB: I have to ask, have you ever gotten any feedback from Dan Aykroyd for "Daniel's Blues?"

TS: You know, I don't know how it happened and I wish I had more information, but a bottle of wine from Dan Aykroyd's vineyard showed up at my house once with his signature on it. There was no note, no explanation, and no way to contact him, but I got it, so he must have heard or somebody did. I feel kind of bad and I want to talk to him, because ["Daniel's Blues"] is such a sad song and I didn't want to sensationalize anything. I was probably doing too many drugs at the time, but I'm very emotional about it. I love the Blues Brothers and it was this sympathetic song for something that obviously didn't happen. I don't know where that song came from but somewhere deep in the weird recesses of my mind.

AB: I love the song because it has heart and there humor in it. I'm not sure if you did this on purpose or not but the line "Oh, who do I call?" immediately made me think of Ghostbusters.

TS: Yes! I always have little bits that I throw in that if people want to dig deeper, they can have fun. I've actually gotten emails from people criticizing me that my timeline is off in the song. Obviously it's off, it's a fantasy! You just have to listen to the song and appreciate it.

AB: It's interesting because HEAL was so autobiographical and real, but a lot of your other work deals heavily in fantasy and symbolism. Do you know what you're going to be sticking with next?

TS: I honestly have no idea. I didn't intend for HEAL to be this autobiographical, it just kind of happened. It's always a matter of what happens next that excites me. I have an idea for the music style, but my mind changes four times a day for what I like, so there's no way to tell at this point.

AB: So, are you sticking with a louder sound then?

TS: Oh, yeah. I don't think I'm going to be going back to the acoustic guitar for a while. If anything, I think the next record of mine will be louder if possible.

AB: Maybe get some more keys like in "Same Emotions."

TS: That was the most fun song to record. That keyboard solo at the beginning was basically me losing my shit on a keyboard for three or four minutes.

AB: I am pumped to hear the new album in concert.

TS: I can't wait. I want to take it on the road so bad I want people to experience this with me.

AB: Excellent, man. Thanks for your time.

TS: It was great talking with you. I'll see you in Cleveland!

TS: I kind of stick out, too. I look like the Hell's Angel who's playing rock 'n' roll, so we'll see each other for sure.