Jay Stevens is angry. What made him really angry? Read this edition to Street Corner Soapbox to find out. 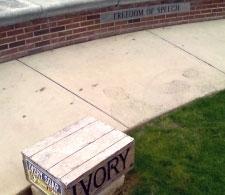 You want to know when I got really angry about the Penn State University scandal that's tearing up the school?

Sure, I was shocked as anybody when I found out that Joe Paterno and the Penn State administration thought that an adequate punishment for former long-time assistant coach Jerry Sandusky – who was caught in 2002 raping a small boy in the football building – was to take away his keys to the locker room and to forbid him from bringing boys on campus. I agreed wholeheartedly with the firing of Paterno and Penn State president, Graham Spanier, and felt a kind of low-level fury against the men who'd protect a pederast to protect a football program.

No, when I got really angry was when I found out that Sandusky ran an overnight boys football camp for six years afterward here in Erie at Penn State Erie, The Behrend College.

There are no allegations – yet – of any misconduct by Sandusky with Erie-area children. Still, not only did Penn State officials let Sandusky loose among Happy Valley's children, they apparently had no problem sending a serial molester to their Erie satellite campus, either.

And make no mistake, this scandal is not over. There are the criminal trials of Sandusky, as well as of Tim Curley and Gary Schulz, the administration officials who are being charged with perjury for lying to the grand jury and on another charge for not reporting the incident to authorities. After the criminal trials will come the civil suits – and no doubt victims of Sandusky will be seeking redress from Penn State and Joe Paterno.

And that's not even considering the federal probe into Penn State that's going on. Will they find others who knew? Will they find that Paterno and the administration knew about Sandusky as far back as 1998, when he was being investigated by police?

In short, Penn State is going to suffer a lot more damage in the coming months and possibly years. Donations will likely go down. Football revenue will suffer. Already advertisers are pulling out of Penn State games broadcast on ESPN. Who'll buy the merchandise now? And who would want to play for Penn State? And then there will be all those lawsuits...

No wonder Penn State's credit rating might be downgraded. If it it does, that means the university will be forced to pay higher interest rates on loans, another financial burden the university can ill afford, what with Governor Corbett controlling state funds for the school. Corbett, of course, was state attorney general when the Sandusky probe began, and Corbett was not happy with the school about how it handled its former coach. He's not likely to have much sympathy for Penn State.

That's all to say Penn State is in for some rough times ahead with expenses shooting drastically upwards and revenue likely bottoming out. And who do you think will suffer most with budget cuts and hiring freezes (or layoffs)? That's right: the place where you think nothing of allowing a known pederast run a sleepover football camp for young boys. Penn State Behrend.