Was the Department of Homeland Security involved in the crackdown on Occupy camps? That's what Naomi Wolff would have you believe. Jay Stevens takes to the Soapbox in hopes of bringing us some truth. 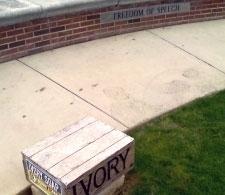 Writer and critic Naomi Wolff recently penned an article for The Guardian entitled "The shocking truth about the crackdown on Occupy." Only there's not much truth there, and its fictions could undercut the Occupy movement.

In it, Wolff claims that the Department of Homeland Security "coordinated a violent crackdown" of Occupy camps throughout the nation at the behest of Congress. Not true. Or, at best, wild speculation. For one, DHS is a cabinet-level branch of the executive. Congress doesn't "direct" it at all. For another, there's absolutely no evidence that DHS ordered the evacuation of any Occupy camp.

Mayors of cities with Occupy encampments did attend conference calls with each other to discuss strategies and tips on how to deal with the protesters. Included in the discussions were the best way to evict Occupy camps and deal with protesters.

Protesters have reported seeing DHS officials at the scene of protests. None of these sightings have been confirmed or indicated that DHS had any direct role in the evacuations of Occupy sites.

Federal agents from the Federal Protective Service (FPS) – part of DHS – were spotted near the Occupy Portland encampment in Oregon. An agency spokesman admitted to The Oregonian that its agents were working with city officials, but only because the protest there was encroaching on federal land. The FPS enforces laws on federal government property.

So far the only report of DHS working with municipal authorities comes from an anonymous Department of Justice source in citizen journalist website. And even according to the source, the federal government has been dispensing advice, but the decision on whether to evict belongs squarely with municipalities.

Part of DHS' mission is to enable communication between state and local authorities to respond to acts of terrorism and "other man-made disasters," and DHS also teaches a course to authorities called "Managing Civil Action in Threat Incidents" that instructs authorities on how to deal with protests, "from a small peaceful assembly to a large out-of-control, violent confrontation," in the name of public safety and advises on "media relations, demonstrator tactics, [and] riot control agents."

If DHS is advising and its alleged coordination is real – and, frankly, I think it's likely – that's a far cry from the agency's original purpose, to protect the country from foreign terrorism. In that way, it's a lot like other Bush-era anti-terror policies: designed to deal with a foreign threat, but actually used to punish Americans.

Frankly, that's bad enough and should be the story that's being reported. But now any criticism of DHS is going to be ignored because of Wolff's article because of all of its inaccuracies and histrionics. People will just point to her piece and equate any criticism of DHS within the context of the Occupy movement with Truthers and Birthers.