Assessing arrests, injuries, and damages in aftermath of downtown riots 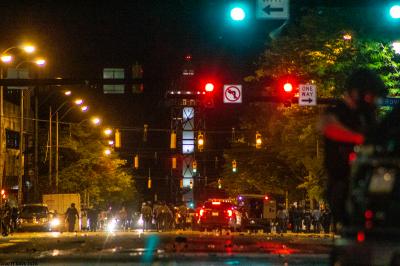 The precarious state of race relations in the United States again came to the fore last week, with the death of an unarmed black man at the hands of a white police officer in Minnesota. Feelings of frustration, indignation, helplessness, and disgust have metastasized into chaos across the country, including historically redlined Erie. As we sift through the fallout of rioting and violence, we are left with a sobering reminder of how far we have yet to go in the quest for "liberty and justice for all."

Here is how the situation came to a head last weekend:

George Floyd, a 46-year-old African-American man, dies in the Powderhorn neighborhood south of Downtown Minneapolis after white police officer Derek Chauvin kneels on Floyd's neck for over eight minutes. The arrest and death from excessive force stems from allegations that Floyd used a counterfeit $20 bill at a nearby deli. Chauvin had 18 complaints on record before the incident, which drew charges of third-degree murder and second degree manslaughter.

Early on, reactions to Floyd's death manifest as peaceful protests and demonstrations  throughout Downtown Minneapolis-St. Paul. However, as day wears on, the unrest escalates and rioting, fires, and looting sweeps through the streets. Throughout the week, outrage surrounding the event sparks protests in over 100 U.S. cities, with many taking violent turns.

A peaceful protest in Perry Square escalated, with damages to persons, property, and the community's psyche that are sure to linger.

By early Sunday morning, seven arrests had been made and a dozen officers had been injured. Downtown continued to clean up and recuperate from the events on Monday.