Stephen Trohoske's Jazz Gypsies featuring Roby "Supersax" Edwards will take the stage at 4 p.m. on Saturday. Ryan Smith caught up with Supersax, who admits to being a "music nerd." 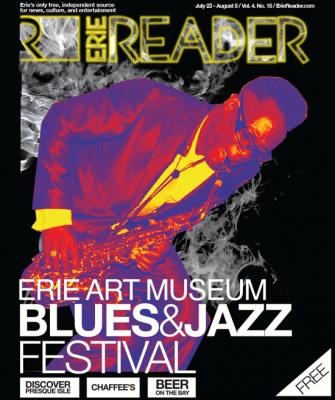 Get your ears good and ready for this one, Erie Art Museum Blues and Jazz Festival-goers:

But before that supergroup takes the stage at Frontier Park, the Reader caught up with Edwards (as we have with other headliners in recent days) for a quick chat, about music, about Erie, and all that jazz.

Here's what he had to say:

Ryan Smith: Hey, Roby! Thanks for taking some time with us, here. First off, I'll ask you to give us some words to describe your sound. And, to the lay listener, how would you describe that illustrious form, its traditions, and its heritage?

Roby Edwards: I would describe my sound as bluesy, crisp and clear. It's very much modeled on Charlie Parker's powerful sound. Hank Crawford is always there somewhere in my sound. I just love Hank. Another sound I love is Gato Barbieri's, which is much more prominent when I play the tenor sax.

As for tradition, I've been initially influenced by great jazz players who were also great natural blues players, and that is not always common. Especially in the [present], so-called "Jazz Education" era we find ourselves trapped in. I've been able to craft a certain sound because I chose to learn to think of musical expression as first a sound, a feeling. When I first heard Wes Montgomery [for instance], I wanted to feel like what I heard, and it started with Wes' amazing sound. Same for when I hear Gato Barbieri. And when you want to "sound" like something as great as those masters, it will always lead to your own sound.

RS: Right on. Now, talk a little about what you know about the Erie Blues & Jazz Festival, and about the city itself. From a music culture perspective, what are some of the similarities, and differences, between your home city and our home city of Erie?

RE: Well, the first time I came to Erie, years ago, was to meet and play for the first time with my good friend, Steven Trohoske. I was very impressed with the festival and everyone who was there, and have wanted to return. I have been back to Erie several times to play with Steve at different places and always have a wonderful time. Erie is a place you look forward to going to, because you know there are great musicians here -- and very appreciative listeners. Musically speaking, I would love to see Pittsburgh's blues scene as strong as Erie's. I love the blues – you know, the real blues – and its tough to find in the 'Burgh. I love that Erie is part of Penguin Nation – always makes me glad to be with fellow Pens fans. But, finally, there are many great musicians that call Erie home, just like in Pittsburgh, so you know you're going to be able to get down and have a great show.

RS: And what's some of your favorite listening right at the moment?

RS: Lastly – and I've been asking alotta great musicians this lately -- can you share any secrets of how you keep it so cool? I could really use a lesson.

RE: That's an interesting question. I was a music nerd when I was younger, and always knew I'd be "cool" one day! I think it's just the more you do something, the less stressful it is, and learning to be a performer is a stressful process – at least it was for me. So, now, I can think about how to reach people, instead of thinking about how nervous I am. But, of course, it's a work very much in progress.

Thanks for the sound lesson, Supersax.

For a full lineup, and more, about this year's Erie Art Museum Blues and Jazz Festival, check this out.

And keep checking back in here at eriereader.com for more interviews with some of this year's fantastic Blues and Jazz performers.

You can reach Reader writer/photographer Ryan Smith by e-mail at rSmith@eriereader.com, and follow him on Twitter @ryanmsmithplens.