The Eerie Horror Fest: The Saints Come Marchin? In 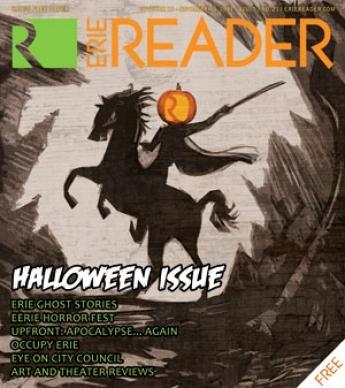 Greg Ropp considers himself the luckiest fanboy alive. And looking around his small one-bedroom apartment in Edinboro, you see proof to his claim. The walls are loaded with movie and music memorabilia ? mostly framed pictures of Ropp with celebrities including legendary shock-rocker Alice Cooper (who has earned his own mini-shrine on the wall), ?Candyman? actor Tony Todd, and Jason Mewes (Jay of Kevin Smith?s Jay and Silent Bob), among others, in addition to original posters of such iconic horror films as ?Halloween? and ?The Texas Chain Saw Massacre.? Stacks of DVDs and Blu-Rays lay in front of a massive 80-inch flat screen TV and the furnishings are akin to the apartment of a 20-something rather than a man in the latter half of his 40s.

?I wear the 46-year-old slacker fanboy look with pride,? boasts Ropp, who is decked out in a Pink Floyd T-Shirt and faded jeans (noticeably absent is his trademark brown blazer). It?s a look that has earned Ropp instant recognition in the area as he has spent the past decade building himself up as one of Erie?s greatest hype-men through his numerous endeavors including concerts, conventions, festivals, and any other means he can think of to support the local arts, artists, non-profits, and Erie in general.

Ropp?s biggest and most successful event will once again pack the Warner Theatre when the eighth annual Eerie Horror Film Festival and Expo takes place from October 27 to 30. The annual celebration of all things suspense and gore has enjoyed many successes in the years since its inception in 2004 and has garnered attention for being perhaps the most unique (if not only) event of its kind to be held in Erie. Spectacles like professional chainsaw carvers, patrons dressed as zombies, screenings of nationally?and internationally?recognized horror films, and the appearances of celebrities like Kane Hodder (Jason from the ?Friday the 13th? movies) and actress Adrienne Barbeau are all too common when the Horror Fest is in town, attracting thousands to the historic Warner. ?We are the rebellious ambassadors of Erie,? says Ropp of the Horror Fest?s significance to the city. ?We run the Horror Fest like a rock show. Walking in through the doors of the Warner Theatre, we want you to feel a movement and excitement ? it?s a very rock and roll atmosphere.?

The rock and roll mentality has helped solidify steady growth in attendance year-by-year ? from 300 in 2004 to the averaging 2,000-plus attendees since moving to the Warner Theatre in 2008. ?Our first year, the reception was electric,? says Ropp. ?It was really mind boggling because it showed us there was a definite interest right off the bat. Sometimes with Erie they have to put a toe in the water to test it out, but with this, they dove right in. Now people put us up in the same class as the Erie Summer Festival of the Arts, Roar on the Shore, Celebrate Erie?we are among them as one of the big annual festivals. Our growth is off the charts. The question now is where do we go from here? I?m walking a tight rope without a net ? we have to go bigger and get better films and unexpected guests.?

Ropp is taking the first step on that tight rope with this year?s Fest, one he admits to being especially excited for, as he plans to mark a new milestone with the announced special guests Norman Reedus, Sean Patrick Flanery, and David Della Rocco from the cult hit ?The Boondock Saints.? ?[?The Boondock Saints?] is a big get for the Horror Fest. From now on, I want to have at least one guest each year where people will say, ?Holy shit! How did you get them?!? The excitement for this is huge,? says Ropp, as he reports that the presales for this year?s Horror Fest reached record numbers following the announcement of booking the ?Saints.? He expects final attendance numbers to be an all-time high as well. ?This has major crossover appeal and gives people who may be hesitant about the term ?horror? a reason to come check out this festival. The average filmgoer has a perverted view of horror movies that is all masked guys, dead teenagers, and gore.?

It is that skewed sense of the term ?horror? that Ropp believes may be a hindrance to the Festival when it comes to seeking support from the businesses and leaders of Erie. He notes that he has seen a decline of sponsorships and financial aid in recent years, which he notes could stem from the troubling economy, but may also play into the perception and stigmas associated with the Horror Fest. ?The economic downturn has helped no one in the arts in Erie. There?s no state money left, I get that. I?m not bitching that I?m not getting money this year because I realize there are more important things out there?but how does someone get grant money, sponsorship money, for something that might attract 500 people and have no economic impact, while we are bringing in thousands of people each year??

He continues, ?I think Erie has supported us as much as it understands us. People hear horror and they think torture porn like ?Saw? or ?Hostel,?? he says. ?We are not promoting that, nor are we trying to discredit Erie. The rest of the world gets where we are at. We?ve had people come here from places including Japan and Australia. The world is coming to Erie because of this event. We are ranked among the top five horror festivals in the country. The people of Erie have been helpful, but there are still a lot of people who scratch their heads. They need to get past the word ?horror? and learn how to wrap their heads around it. We are trying to bring in something new that is hip and untested. I don?t want Erie to keep being the tagalong. Let?s be the trendsetters instead of the followers.?

Ever the optimist, Ropp is looking beyond his troubles in the present and planning for the future. Erie?s greatest hype-man and perennial fanboy slacker has plans for how to improve upon his work in the community, including fostering the development of the Film Society of North West Pennsylvania ? which would serve as an umbrella group to several area film festivals including the Horror Fest, the Edinboro Film Series, and the Spirit Quest Film Festival, while also promoting filmmakers and filmmaking in the region ? as well as toying around with the bold initiative of getting Erie named the ?Halloween Capital of the World.? ?I?ve had people ask me to petition City Hall,? he says of the endeavor. ?I think it would be great. We could utilize one of the empty factories to create a Horror Hall of Fame and Museum, do ghost tours, we have the Mad Anthony Wayne story and a lot of famous and historical things that have happened here, great things that could tie into the horror genre.?

He continues, ?A lot of what I?ve done in my life is to foster good art, encourage people to create, and understand that expressing is what life?s all about. I?m really doing all this out of the love of doing it. I love showing people a good time. There?s never been a time in my life when I didn?t want to entertain people and I don?t think I will ever lose my appreciation for music, movies, and the arts?I?m just very blessed to be a fanboy.?

The eighth annual Eerie Horror Film Festival and Expo will take place from October 27 through 30 at the Warner Theatre. A portion of proceeds from the festival will benefit the Make-a-Wish Foundation. For more information on the event, including a complete list of celebrity guests, visit eeriehorrorfest.com.

by Mark Toriski6/13/2012, 8:00 AM
For your viewing pleasure, three films ripped from the Erie Reader Queue.

by Mark Toriski5/31/2012, 2:59 PM
For your viewing pleasure: a comedy, a drama, and a documentary -- all available for instant streaming on Netflix and instant reviewing here at Erie Reader.