This Brad Meltzer thriller is a not-so-bold undertaking 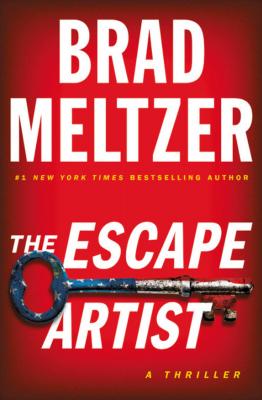 If you´re a devotee of The History Channel you've probably seen Brad Meltzer´s Decoded, a contrived but entertaining documentary series in which Meltzer, largely off-stage, sends a team of earnest looking investigators to unearth the truth about things like "did Hitler really die in Berlin in 1945?" or "was Patton murdered or did he just die in an auto accident?"

Meltzer is a best-selling author of a dozen thrillers and spy novels, as well as works in a host of other genres, including award-winning children's books and comics. His bio is impressive, as are — apparently — his sales figures, which led me to expect something special when I picked up his latest thriller. The Escape Artist is the story of Zig who is — seriously — an undertaker. Well, not just an ordinary undertaker. He's a mortician who has the unsavory job of greeting dead American soldiers in Dover, Delaware and repairing their broken bodies so that they look presentable at their funerals. Zig handles his duties with professional detachment until one of the bodies turns out to be that of a young female soldier named Nola, whom Zig not only knows, but owes big time, since Nola saved the life of Zig's daughter. But there's a problem. The body tagged as the Nola Zig knows, isn't really Nola. Someone has substituted another body and that's enough to launch Zig on an improbable search for the real Nola that draws him into a world of secret military facilities and high level, deep-state type government deception.

I give Meltzer a lot of points for crafting a story with an undertaker as a protagonist. That can't be easy. But "crafting" may be giving the work too much credit. The Escape Artist has the feel of a hurried work written to meet a publisher's deadline by an established author who no longer has to worry about the quality of what he produces. Despite an imaginative plot, the book is full of awkward sentences, weak description, characters who sound the same and inauthentic dialog. It needs a good edit, and the problem with craftsmanship starts on the first page. The front piece is a historical teaser about a man named Wilkie, a magician who served as head of the Secret Service. Meltzer tells the reader that "Willkie was a fan of Houdini and did his own tricks himself." Ouch. How else would he do "his own tricks," if not himself?

I'm a fan of flashbacks, but Meltzer overuses this device to the point of tedium, asking the reader to endure a dozen of them as he tells the oddly disconnected story of Nola's childhood through frequent interruptions of the main narrative. It suggests he was trying to reach a publisher's or agent's word count. Just when Meltzer drew me into the story, he'd ask me to go on an excursion that had little to do with what I really wanted to know, which was simply what happens next.

Every thriller reader expects a hectic finish that will keep the pages turning at one in the morning — the big reveal in which it all makes sense, the good guys win, and the world is set right. Meltzer's finish can wait till tomorrow evening. Two stars at best.

Richard Perhacs practices law in Erie. He holds a Master of Fine Arts in Popular Fiction. He can be reached with comments and suggestions for reviews at richardperhacs@gmail.com.

Lab Girl: A Story of Trees, Science and Love