The Onion's story of Brad Meredith Blevins continues into a second season of fantasy goodness. 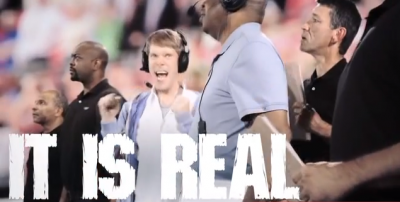 The Onion is a wonderful thing. It's absurd and, ultimately, hilarious. The fake news site even has Don Turnbee, an Erie, Pa. native who's life seems to revolve around fast food. As Martha Steart would say, it's a good thing. With the regular football season approaching -- and even more importantly for some poeple, the fantasy football season -- the creative minds over at The Onion have started the second series of Tough Season, a "web series where the players are acting, the actors play people, and fantasy (football) becomes reality," which is, yet again, a good thing.

Tough Season chronicles the story of Brad Meredith Blevins, a dim-witted fantasy football player who (spoiler alert for those who care that much about an online series) unexpectedly rose up to the top of his office league despite his lesser efforts in season one. What makes Tough Season great is, of course, how absurd it makes fantasy football look, with the owners treated like actual football coaches with full a full supporting staff and actual NFL players like Andrew Luck, Matt Forte, and Alfred Morris all hoping to perform well on the field and "score touchdowns for points." The Onion even has fun with Tough Season sponsor Lenovo, with Brad often butchering the product's name and throwing his computer into the garbage when he's done with it.

Brad may be the returning champ, but he still has to face his fellow officemates on the field, such as his extremely creepy rival Harris Crenshaw, the witless Jack who's just happy to be in the league, and the Chicago Bears fan who always drafts players from da Bears. Even better, the actual NFL players are committed to the championship, including an always adorable Morris, who openly hopes for not only more wins this fantasy football, but also a pizza party.

If all of that sounds good to you, watch the first episode of Tough Season's second season below or check it out on Lenovo's fancy sponsored page.