The Perfect Shirt for Making Fun of Creationism in School

Sometimes the perfect shirt comes along... 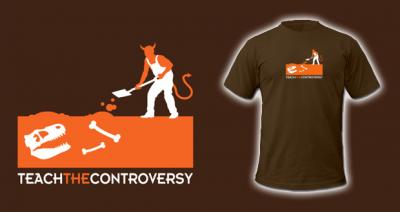 Because we know that dinosaur bones were really planted by beelzebub

Oh my. You write an article, and then the perfect t-shirt pops up.

Here's a little taste of the language from a "Christian" news service supporting the "academic freedom" bill in Pennsylvania:

A lawmaker in Pennsylvania introduced state legislation last week that would protect teachers' freedoms to openly discuss debates on controversial topics and theories, including biological evolution and global warming.

Heck, might as well link to state Representative Stephen Bloom's memo on his bill. From that bill:

The teaching of some scientific subjects, including, but not limited to, biological evolution, the chemical origins of life, global warming and human cloning, can cause controversy...

...The State Board of Education, the board of directors of school districts, public school system administrators and public elementary and secondary school principals and administrators:

Shall promote an environment within the public elementary and secondary schools that encourages students to explore scientific questions, learn about scientific evidence, develop critical thinking skills and respond appropriately and respectfully to differences of opinion about controversial issues.