The Riverside Music Festival is Bigger than Ever

The annual Riverside Music Festival is set to be the biggest and best one yet. 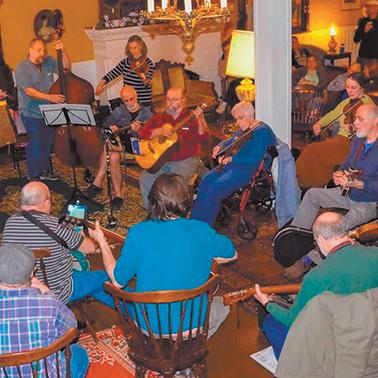 Spring's in the air once again.

That means Cambridge Spring's history-rich Riverside Inn – on its main stage, in its pubs, and at other spaces on and around the inn's grounds – will soon serve as a beautiful backdrop to a sonic celebration of the start of the season.

And according to organizers, this year's installment of the annual Riverside Music Festival – a free event kicking off Friday, April 15 and running day and night through Sunday, April 17 – is set to be the biggest and best one yet.

"I'm really excited this year because we have 87 acts. That's the largest amount of acts we've ever had," chief festival organizer Justin Moyar said in a recent chat with the Reader.

Local and regional favorites including Lower Eastside Connection, Charity Nuse and the Drive, Tiger Maple String Band, Abadon Faluz, Jim Donovan and the Sun King Warriors, Tyler Smilo, and Ron Yarosz and the Vehicle are just a small sampling of this year's lengthy slate of performers.

Beyond that, and for the first time ever, the festival's new Eerie Records stage (to be found at the nearby Villa Inn, just a couple of blocks from the Riverside) will feature tons of live performances for the more metal-minded: Heavy-hitters like The Bees Trees, Joe Nameless, My Secret Weapon, Wave Trails, Anthems of Apathy, and Agrohippie are just a few off the top of that list.

As always at this festival, there'll likely be plenty of pick-up jam sessions happening anywhere and everywhere throughout the grand, old locale (and beyond) all weekend.

Festival-goers can also check out workshops galore throughout the weekend, as well as visit the event's all-local sponsors including the Bearded Woodsman's Beard Oil & Balms (they're even hosting an all-for-fun beard and 'stache competition), Beezlebub's Salsa, and many more. There'll be plenty of other cool stuff, too, like area craft-brewers' brews and wares from local artisans on sale and display.

As always at this festival, there'll likely be plenty of pick-up jam sessions happening anywhere and everywhere throughout the grand, old locale (and beyond) all weekend.

While the Riverside Music Festival – produced and hosted by some of the area's best homegrown artists – is always free for everyone, you could do the festival a favor and buy one of its sponsorship buttons for a few bucks.

One way or another (and one day, or another) do it and yourself a favor and make sure to go – because it's always a really sweet kickoff to the season blooming upon us. – Ryan Smith