Though still potentially unsafe, according to a recent report, Pennsylvania's beaches faired better than nearly every other state 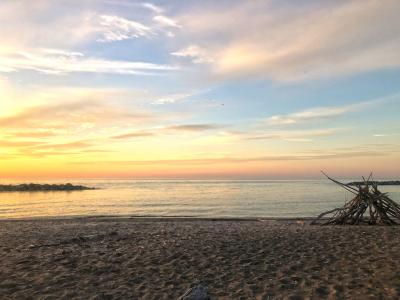 In 2019, harmful algal blooms caused the population around Lake Erie to reexamine their local water quality. As some generations remember the polluted history of Lake Erie in the 1960s and 70s, it's a paramount conversation to continue.

Just yesterday, on Wednesday, July 22, Congress approved a bill for the Great American Outdoors Act by a bipartisan 310-to-107 vote. One facet of this bill would serve to allocate $900 million dollars a year to the Land and Water Conservation Fund.

While the COVID-19 pandemic reduces our options for a myriad of recreational activities, the outdoors has been one of the saving graces in this time.

"Lake Erie has always been a destination for people across Western Pennsylvania to escape the hottest days of summer – and this year especially, we need safe places to cool off with our families," explained Ashleigh Deemer, Deputy Director of PennEnvironment Research & Policy Center. "But we've got to do a better job of keeping the lake clean, if we want it to be safe for swimming," she noted.

In a 61-page report, PennEnvironment looked at fecal indicator bacteria levels compared to the US Environmental Protection Agency's (EPA) "Beach Action Value." This value marks an illness rate of 32 out of every 1,000 swimmers.

According to PennEnvironment, some beaches at Presque Isle were recorded to have bacteria levels above this marker.

Taken in isolation, those statistics may sound grim. A look at the full data set, however, tells a very different story.

Overall, an alarming percentage of beaches nationwide were marked to be potentially unsafe.

Out of the states analyzed, Pennsylvania, Minnesota, and New Hampshire had recognizably lower numbers than any other state. These three states, along with South Carolina, had the fewest number of "potentially unsafe" beaches. It should be noted though that the sample size was necessarily smaller than a larger coastal state like California, with Pennsylvania having the fewest beaches tested.

In comparison, even Erie's "worst" beach, Beach 11, is equivalent to Ohio's "best" beach (Bay View West), and has a lower number than New York's "best" as well (Hamburg Bathing Beach), both of which are on Lake Erie.

This, of course, is just one factor in a literal sea of statistics. Lake Erie is far from pristine, and testing shows that Presque Isle is potentially unsafe during certain days. Even though our rates faired better than many other states, they were still unfavorable conditions. Our water needs to be protected, with continual improvements being made for the safety of not only our lake's swimmers, but the local ecosystem as a whole.

"The best way to protect the lake, and ensure that it's safe to swim every day, is to invest in infrastructure that prevents contamination in the first place," said Deemer.