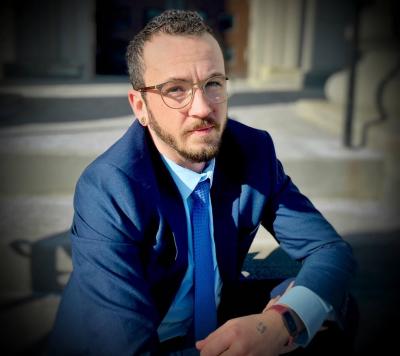 In 2017, Titus made history by becoming the first openly transgender person to be elected to office in Pennsylvania.

On Dec. 15, County Executive Kathy Dahlkemper announced that she would not be running for reelection in 2021.

Titus is the founder and CEO of Compton's Table, an organization for queer youth. They currently serve as Vice-Chair of the PA Commission of LGBTQ Affairs, as well as serving on the advisory council for the Greater Erie Alliance for Equality (GEAE). They are a Jefferson Educational Society Civic Leadership Academy scholar and a 2017 40 Under 40 honoree.

At this time, they are endorsed by Planned Parenthood, the Victory Fund, and the Erie Educational Society.

In addition, Titus is a Licensed Professional Counselor in the State of Pennsylvania, a trauma-informed leader, public speaker, and activist. They have worked with the Erie County Office of Children and Youth (ECOCY) since 2007.

Titus is a doctoral candidate with the University of Southern California and holds a Masters degree in community counseling from Edinboro University and a Bachelor of Art's in Marriage and Family Studies from Mercyhurst University.

They grew up in nearby Crawford County, in Titusville, PA, and moved to Erie in 2003. They are married to Shraddha Prabhu, a professor of Social Work at Edinboro University and the parent of two children.

The primary election for Pennsylvania is slated for Tuesday, May 18, 2021.

For more information, go to tylertitus.com