Worried about the upcoming onslaught of traditinal Christmas songs? Instead of constantly covering your ears, embrace the movement with some unorthodox holiday song suggestions.

by Alex Bieler
View ProfileFacebookTwitterInstagramGoogle+RSS Feed
November 1, 2014 at 10:00 AM 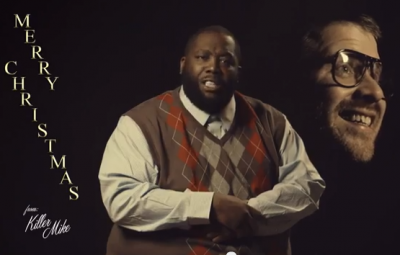 There are two groups of people when it comes to what you call the day after Halloween: those who see it as Nov. 1, and those who call it the first day of Christmas season. That's right, it's time for various department stores, a few particular radio stations, and Christmas fanatics (my own mother included) to start pumping out holiday-themed songs nonstop, Thanksgiving be damned.

In fact, there are some people who didn't even wait for All Hallow's Ending, with some radio stations switching to an all-holiday format in October as an attempt to snag an easy ratings boost. The sudden intrusion of Bing Crosby's whole holiday discography and the unfortunate existence of Paul McCartney's "Wonderful Christmastime" isn't endearing to everyone, however, but it's hard to avoid for anyone who ever plans on being at least slightly involved with the rest of humanity.

While Christmas music isn't for everyone, it does make a certain percentage of the population happy when they blast "Jingle Bells" and "Rudolph the Red-Nosed Reindeer" on repeat, so instead of being a grinch about the early holiday season supporters, I suggest putting together a new holiday playlist for the next two months. There are plenty of alternative songs for the season, but I've collected a few choice cuts to help you kick off Nov. 1. Who knows, maybe you can even get Classy 100 to play one of these golden tracks (on second thought, probably not).

Tom Waits - "Christmas Card From a Hooker in Minneapolis"

Tired of heartwarming holiday songs? Try out this gem from gravelly-voiced musical god Tom Waits. For full effect, I suggest using the live version where he starts and ends with snippets of "Silent Night."

Ever wanted a Christmas song that drops the f-bomb in the title? Then this kickass number from Run The Jewels should be right up your proverbial alley. As a bonus, I'm embedding the music video for the song, because it's one of the best I've seen in recent memory.

Every holiday needs at least one song about a department store snata fetishist. Fun no-holiday-themed fact: Edinboro University Assistant Professor Jeremy Galante has worked on a few They Might Be Giants music videos, including this one for "Icky."

Tired of happy holiday songs? Sharon Jones is here to help, and sound really awesome while doing it.

There are plenty of other alternative songs for the season, but these five should help get you started. At the very least it'll be better than "Wonderful Christmastime." Happy (early) holidays!