This gallery is quite unlike others. It isn?t a big room with paintings around the walls and a sculpture in the middle. Rather, it is two galleries: one on the ground level, with a larger, lovelier gallery on second floor, which in turn is a series of smaller galleries set up like parlors, offices, and dining rooms with art in them??a real gallery,? as one of my companions on a recent visit said. 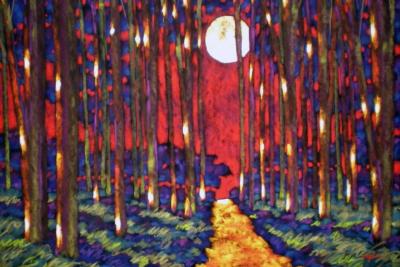 It isn't often that a new gallery opens, but there is a new and intriguing gallery in the heart of downtown: the D'Hopkins Denniston Gallery of fine art, named for its owner Diana Hopkins Denniston, who graciously gave me a tour of the facility.
This gallery is quite unlike others. It isn't a big room with paintings around the walls and a sculpture in the middle. Rather, it is two galleries: one on the ground level, with a larger, lovelier gallery on second floor, which in turn is a series of smaller galleries set up like parlors, offices, and dining rooms with art in them—"a real gallery," as one of my companions on a recent visit said.
Independent galleries in the Erie area have found that operating solely as a gallery and paying the bills are mutually exclusive, so they also do framing or have a gift or collectable shop. Diana is resolving that dilemma by having spaces for hire, hosting board meetings, bridal showers, or anything that might be enhanced by being surrounded by art in a parlor, office, or dining room.
She only represents six local artists: Jan Lutz, Tom Ferarro, Brad Lethaby, Ron Bayuzick, Chris French, and John L. Scott. The other represented artists are non-local, national and international names.
The space and collection reflects the taste of the gallery owner and the collectors to whom she hopes to appeal. On my first trip, my one criticism, if there was one, was the "sameness of tone" of otherwise very unlike artists and work, as if the high notes and low notes in a concert, or alternately the highlights and darks of a painter's palette, had been removed, leaving only mid-range values squashed together. Feeling that if a few really challenging pieces were added here and there, the uniqueness of all the other work would also stand out in greater relief, I was pleased to see, on a recent visit, such an evolution starting to take place. When I walked in the door, I immediately spotted "Le Repose," a colored etching by Auguste Renoir, and then later other additions, which in turn enhance the look of the whole collection.
Celebrating the grand opening, the featured artist is R. John ("Bob") Ichter, an award-winning, nationally-collected artist specializing in watercolor and pastels who hails from Atlanta. His work is different in a way that is hard to define. In part, this may come from his color palette, which is entirely comprised of imported colors, and his strongest compositions favor simplicity.
Though his watercolors are eye pleasing, the work that really stands out is his pastels. Quite unlike other pastels that I have seen, he doesn't use white paper, which allows the light to pass through and bounce back causing bright colors, but rather, he hand rubs the colors onto black suede. Note to the collector here: All these suede panels are archival, meaning that the artist has the respect for both himself and his collector's investment to ensure the survivability of his work. The color is deeply saturated with the light passing through and absorbed into the black suede and trapped there, causing both a fuzzy visual texture and an unearthly glow to the work.
There is a decidedly Asian influence to his work, as seen in his watercolor "Long Ago and Far Away," with flowering branches coming from someplace above and sweeping through the white picture plane. With the white paper background, the color doesn't need to be pushed too far to stand out. The soft wet-into-wet branches sport pink tulip tree-like flowers, which are delicately outlined in rose. This resembles the pastel, "As You Wish," with its branch running diagonally through a yellow ocher background and blossoms of purple and red. Both of these paintings are somewhat reminiscent of Shibata Zeshin's "Birds and Flowers of the Four Seasons," where branches come out of nowhere against a yellow ocher sky.
This Asian influence becomes more clear in the long narrow rectangle, which is "Secrets of the Bamboo Forrest," a composition of violet background, a bamboo grove with sparks of red in the bamboo and yellow in the leaves. The bamboo in Asian art represents the spirit of summer but is also one of "the Three Winter Friends." It symbolizes tranquility, integrity, flexibility, simplicity, humility, and even scholarship.
"Zen Garden" and "Koi" combine the Asian motif and his hobby of raising tropical fish. Here is a view of the fish from above as they glimmer and dart among the lily pads.
A bridge from Asia to here is "Mocha Dragonflies," a deceptively simple looking composition where the light source seems to be the dragonfly's wings, with their glowing sparks of yellow-white and further sparks in the surrounding reeds.
Going from Asia to something no less exotic are his "Gravity's Rainbow," with its red path running to a horizon of blue trees and green sky and radiant moon, with the forest in middle ground in families of red and purple and Mr. Ichter's signature sparks of color; and, "Every Fairy Tale Comes Real," with shorthand squiggles for ground cover, a horizon of blue to violet trees, red sky and glowing moon, earth-tone forest, and a golden path that just might lead to a gingerbread house.
In many languages, English included, a distinction is drawn between "purple" and "violet." Though combinations of red and blue, purple is mostly red, whereas violet is mostly blue. Expertly using both, Mr. Ichter places ocher and purple pansies against a violet background, entitled "Take Me Home," which you can do by going to the D' Hopkins Denniston Gallery of Fine Art, 5 W. 10th St. This exhibition continues until June 30. Hours: Monday through Friday 11 a.m. to 5:30 p.m. and Saturday 11 a.m. to 3 p.m. Grand Opening with ribbon cutting June 15, 10:30 a.m. to 10 p.m. The gallery can be reached at 455.1616, fax: 836.2879, and email: ddennistongallery@yahoo.com.