Who took the 'fun' out of 'dysfunctional'? And where is that fun? Art Critic Luke Gehring explores the exhibit currently on displace at the Erie Art Museum. 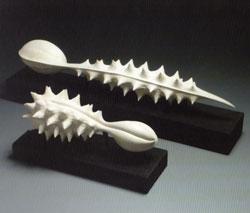 I don't know who took the "fun" out of "dysfunctional," but I do know that you can find it again at the Erie art Museum's main gallery.

This exhibition was organized by the Wood Turning Center of Philadelphia as a traveling juried show.  It centers on the use of wood, especially as carved in the turning process on the lathe. However there is much more to the show than this.

Most of the objects could be classified as wood sculptures, but some defy that definition. Some derive from functional forms, such as vessels and furniture, but some do not. Some are made of wood but are inspired by non-wood forms. Some are not made of wood but are inspired by wooden forms. There are even two videos: one contemplating what is left over after you carve a piece, and one contemplating the ultimate fate of a piece at the end of its useful life. So it's clear to see, there is a lot here.

Dada was a movement that concentrated on presenting objects in absurd ways in order to confront the viewer with the reality. For example, an artist may take a porcelain cup and lined it with fur, leaving the viewer to be struck with the absurdity of that situation but also having to, at least on an unconscious level, deal with what a cup is for and what fur is for and why they don't naturally go together.

Conceptualism tends to be an elaborate game of "what if" and is centered on the notion that art is only in the mind of the artist and anything else is just documentation. Unfortunately, this often has led to artists being all talk and no show.

Obviously I have a bias against traditional Conceptualism, which I willingly set aside here. These objects are heavy on the visual even when they deal with a conceptualist idea, which is, I think, as it should be. Dan Strothers took the question of "where does dry ice come from," and let his mind run wild with it (it must come from dry water taken from a dry lake with dry fish in it). Robert Ellsworth's "Innuendo," takes the problem faced by some men—"It's like trying to shoot pool with a rope" (and I'll leave it there)—and made two skillfully crafted and humorous images of the metaphor.

All of the pieces come with explanations of the artist's ideas, history and goals which can be helpful, if long. But I think that the success of the show is illustrated in that there are many cases where the explanation is totally unnecessary. Michael Brolley's "Ghost of the Hand of the Fathers That Rock the Cradle," is a shelf of wooden dishes, carved in such a way that the bottoms are translucent, and give a hint of a ghost of an image. On the one hand the explanation of how these objects came into being is interesting and adds a kind of poignancy, but my interest in the effect of these objects made the commentary rather anticlimactic.

Another example, Claudia Deschu's "Looking Outside," with its pair of wooden binoculars is pointed to a painted seen in the sculpted window. I started to read the explanation and finally said, "Heck with it; this piece is just too much fun to bother."

The Dada-like objects, unlike traditional Dada "ready-mades," are not altered real objects but pieces created to reflect the idea. Doug Finkel's "Spoons," for example, are carved with spiked handles, rendering them nonfunctional. So too is Robert Suiter's "Folding Bowl," which is not only a bowl that folds in half, but it comes with a handy caring case, with superbly inset brass hinges and clasp—all of which makes the bowl completely useless.

Jordan Gehman is interested in the transience and fragility of life, which shows up in "Rollin' On 20." It gives new meaning to "wheel chair." However this wonderfully joined piece of furniture doesn't effetely function as either a chair or a wheelchair.

Then there are those who throw a spotlight on what we might otherwise take for granted. Jerry Bennet has been interested in combining the fluidity of glass with the warmth of wood, which he expertly does in his "D'Canter Can't."

In a similar vain, there is Hayami Arkawa, a furniture maker, who has presented us with ball and claw baseball bats. It makes no sense whatever to have a bat terminate in what we have come to associate with the foot of a Chippendale chair but then it makes no particular sense for a chair or table to have a leg terminate in an animal appendage. The difference of course is that the Chippendale chair can still be used, and we take the innovation somewhat for granted, but a Chippendale bat is useless, and we can't ignore that fact.

This is a show that should not be ignored, but rather approached with eyes and minds wide open with a willingness to put the FUN not only back into DysFUNctional, but into art as well.