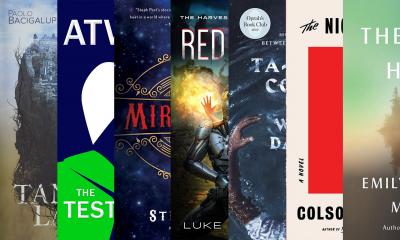 Last week, I compiled a list of recent local history books worth passing the time with over these coming months. I also wrote about local podcasts worth binging around the house. Nick Warren has described his binging experiences with Netflix's The Witcher and, of course, the docu-series that everybody can't stop talking about, Tiger King.

While I tend to read and write about nonfiction, fiction was always my first love. Over the past few months (even before social distancing and stay-home orders became the new normal), I was making a conscious effort to get back into reading more fiction, having spent the past few years reading a probably unhealthy amount of reporting on the day-to-day happenings of U.S. politics.

Since, once again, I find myself trapped in a continuous cycle of reading news reports and examining continuously updated data that is well outside of my control, I've been doubling-down on my efforts to avoid the creeping existential dread and let myself be distracted in a way that transports me in ways no other medium can.

While I link to Kindle prices, if you are able, reach out to your local bookstore and see if they can assist you in your purchase. Pressed even has an online form that will let you order books from them still — including free shipping on orders of $30 or more.

While she is best known for her masterful Station Eleven, perhaps a highly-original novel about an apocalyptic virus wiping out most of humanity isn't the escapism some currently need. However, her latest novel — described as "a ghost story that's also about white-collar crime" — secures her as one of the most talented, captivating, and original writers working today. Reviewer Ron Charles wrote in The Washington Post, "The Glass Hotel may be the perfect novel for your survival bunker."

While Whitehead became a household name with his 2016 Pulitzer Prize-winning novel The Underground Railroad, he has been around for a long time (and for those who think they're bored with the zombie-genre, give Zone One a try). His latest, The Nickel Boys, is a very difficult read, but one that is as important as it is disturbing in its fictional portrayal of a real Florida juvenile reformatory. TIME Magazine named it one of the ten best books of the decade.

Coates likely doesn't need any introduction. With this powerful 2015 book Between the World and Me and his long form stories as a national correspondent for The Atlantic (including the powerful "The Case for Reparations"), there was a lot of anticipation leading up to his first fiction novel. It isn't an easy story to explain, but it is done masterfully, interweaving slavery, superhuman powers, and the power of memory.

If you're not sure you want to make a four-book commitment, you can read a prequel ebook for free right now. After studying engineering science at Penn State and neuro engineering at Drexel, Mitchell opted to start writing speculative fiction. His Harvester Series has a bit of everything: fast-paced action, witty one-liners, mercenaries, aliens, sword fights, romance and more, it is likely just the kind of distraction some of us could use right now.

I've always had a fascination with late-19th century / early-20th century circuses, fairs, and carnivals — the idea that something designed to bring so much joy could, by its very premise, have so many disturbing implications behind the closed curtains. I first heard of Post after she published her excellent and dark 2018 southern gothic novel A Tree Born Crooked. Miraculum, which is set amid a 1922 carnival on the Texas-Louisiana border, follows in a similar southern gothic tradition but demonstrates Post's unique voice and storytelling abilities.

Atwood, at 80-years-old, seems to have endless energy (check her out on Twitter, for instance). I first was exposed to Atwood's writing with her 2003 speculative fiction, Oryx and Crake, and I haven't stopped reading her since. Nowadays, Atwood is perhaps best known for her 1985 book The Handmaid's Tale, now an award-winning show on Hulu. The Testaments is a sequel, taking place fifteen years after the original, and it's an excellent follow-up.

Paolo Bacigalupi likes writing fantastical stories with lessons that can be applied to our modern world. With his Hugo and Nebula-winning biopunk novel The Windup Girl and his action-packed follow-up The Water Knife, he demonstrated two very different futures that we could inherit if we don't tackle climate change. With his latest, he and Buckell create a fantasy world with similar lessons "about a decadent and rotting empire facing environmental collapse from within."

What I'm Reading in This Month

The City We Became

Having won the Hugo Award for Best Novel three years in a row for her Broken Earth trilogy has made Jemisin an international superstar in the sci-fi and fantasy world, solidifying her work alongside such greats like Ursula K. Le Guin, Connie Willis, Isaac Asimov, Arthur C. Clarke, Neil Gaiman, and Michael Chabon. She was also the first black author to win the award. Her latest book is "a story of culture, identity, magic, and myths in contemporary New York City" and if reviews are any indicator, it is going to be just as thrilling as her previous books.

Hitting a Straight Lick with a Crooked Stick: Stories from the Harlem Renaissance (2020)

She died in 1960, but somehow, Zora Neale Hurston, author of the 1937 classic Their Eyes Were Watching God, still manages to be one of our most important contemporary authors. In 2018, her previously unpublished Barracoon: The Story of the Last "Black Cargo" was released, telling the mostly-forgotten true story of Cudjoe Lewis, likely the living survivor of the Middle Passage slave trade. This year, a collection of her works written in the 1920s during the Harlem Renaissance has been published, stories "about love and migration, gender and class, racism and sexism that proudly reflect African American folk culture."

Where the Crawdads Sing

My wife is currently reading this one and she says, so far, it's living up to the hype. At this point, most know of this story which has been a chart-topping bestseller since its release and was Amazon's most sold fiction book of 2019. It is no surprise then that it is currently being adapted as a film by Sony Pictures.

This book is a saga following a family in Vietnam from the French colonial era, through the Vietnam War, and to the present day. As The New York Times described it, "'The Mountains Sing' unfolds a narrative of 20th-century Vietnam — encompassing the land reforms of the '50s as well as several turbulent decades before and after — through multiple generations of tenacious women in a single family."

The Girl with the Louding Voice

Daré's book follows a teenage girl in Nigeria who wants nothing more than to get an education, but after her mother's death, her father decides to sell her as a bride in order to collect the dowry. "The story told in this novel is an important one," Chibundu Onuzo says in her review for The Guardian. "The trauma of girls forced into marriage and the blight of domestic slavery in Nigeria are both issues that must be brought to light."

Erdrich, who is a member of the Turtle Mountain Band of Chippewa Indians, tells a fictionalized story based on her grandfather's life on an impoverished reservation in North Dakota and his fight with the U.S. government over the continuous taking of their lands. According to the book's description, Erdrich has created "a fictional world populated with memorable characters who are forced to grapple with the worst and best impulses of human nature."

Lastly, if you would like to read books without spending money and have an Erie County Public Library library card, check out hoopla (it can also be downloaded on your phone as an app). Hoopla gives you instant access to digitally "check out" numerous audiobooks, ebooks, comics, movies, music, and TV shows at no cost.