Dig the grooves in Wanyama's latest visit to the Gem City 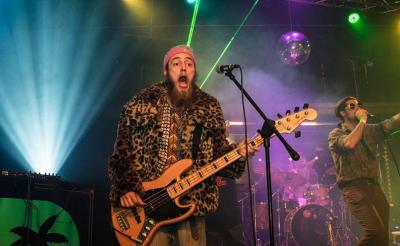 The freewheelin', freestyle-lovin' five-piece's authoritative hometown alternative publication, Cleveland Scene Magazine, puts what the band gets up to — and what it gets down to — something like this: "East Coast meets West Coast reggae, blended with roots rock reggae. With a large helping of hip-hop tossed in. Mixed with some original flavor. Best served live and on fire!"

Crafting a heady blend that's sound-tight, socially-aware, and goofy-fun all at the same time, they're influenced by myriad sources both sonic and social. But what drives them most, they say?

That's why you — all the you's — who dig those types of grooves (or, think you might) should count yourselves in for Wanyama's latest visit to the Gem City, coming up May 5 at the King's Rook.

Could be a helluva good option for your (or, yous'?) later-night Cinco De Mayo revelries, and — as with many shows presented by the fine folks at the Rook — it's free for members. — Ryan Smith

Battle of the Barristers

The State of Black Erie Youth

Where the Heart Is
Erie Reader: Vol. 10, No. 3
View Past Issues
In This Issue

Classic Death Metal Nostalgia with Day of Darkness at BT

Tortoise Forest and Land of Panda