Wolf Speaks Out Against Early Reopening 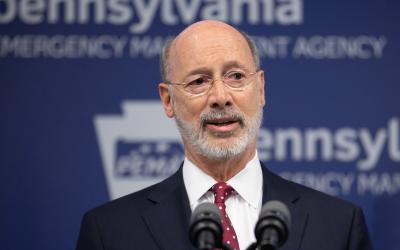 In an online press conference today, Pennsylvania Governor Tom Wolf sternly began by stating that "we Pennsylvanians are in a fight for our lives. The enemy is a deadly virus set on destroying us." Wolf stated that COVID-19 has infected "almost 60,000 of our fellow citizens. It has killed almost 4,000 of us." By the latest count, the numbers are 56,611 and 3,707 statewide.

He continued the metaphor, by singling out those choosing to not take proper precautions, saying that "still, over this past weekend, some have decided to surrender to this enemy. These are politicians who were elected to serve their fellow citizens, others are business owners who are choosing to serve their customers by putting them in harm's way. These folks are choosing to desert in the face of the enemy, in the middle of a war that Pennsylvanians are winning and that we must win."

Wolf noted the state's successes so far, that like much of the county, PA has begun flattening the curve. He spoke of the 24 counties, which includes Erie County, who recently moved into the Yellow phase. On May 8, he also announced that 13 more counties would be moving into the Yellow phase beginning Friday, May, including Butler, Armstrong, Westmoreland, and Pittsburgh's Allegheny County.

PA Politicians Seek to Reopen Areas Prior to State Orders

by Nick Warren5/11/2020, 2:16 PM
Against state orders officials across southern PA plan to shift to Yellow phase on May 15

With a strong-worded sentiment, Wolf said "to those politicians who have decided to cave in to this coronavirus, they need to understand the consequences of their cowardly act." He continued, saying that "the funding we have set aside to help fighting this crisis will go to the folks who are doing their part," citing the CARES Act funding.

I won't sit back and watch residents who live in counties under Stay at Home orders get sick because local leaders cannot see the risks of #COVID19 and push to reopen prematurely.

Today I am announcing consequences for counties that do not abide by the law to remain closed.

"However, other discretionary funding won't go to counties that put us all at risk by operating illegally. To the politicians urging businesses to risk their lives, and to risk the lives of their customers or their employees by opening prematurely, they need to understand that they are engaging in behavior that is both selfish and unsafe."

Wolf remarked that business owners would be at risk of losing state-issued documents such as health department certifications, certificates of occupancy, and liquor licenses if they opened before they were instructed. Citing that the danger involved, Wolf commented that "that's not only morally wrong, it's also really bad business."

Governor Wolf also wagered that "businesses that do follow the whims of local politicians" might also find themselves uninsured, "because insurance does not cover things that happen to businesses breaking the law." Wolf recommended that if any employees felt uncomfortable because their business was being opened prematurely, they should choose to stay home and file for unemployment.

I intend to keep fighting.

And, I believe that the overwhelming majority of my fellow Pennsylvanians intend to keep fighting it too.

And with that unity, I know we can win.

"The point is, we are fighting a war, that has taken the lives of too many people," Wolf said at the conclusion of his prepared statement. "We are winning the war, but it has not been easy. It calls for sacrifice, it calls for heroism of a sort we have never asked of ourselves before. And it calls for all of us, every single one of us, to fight this war together." He concluded that "I intend to keep fighting, and I believe the overwhelming majority of my fellow Pennsylvanians will continue to keep fighting too, and with that unity, I know we can win."