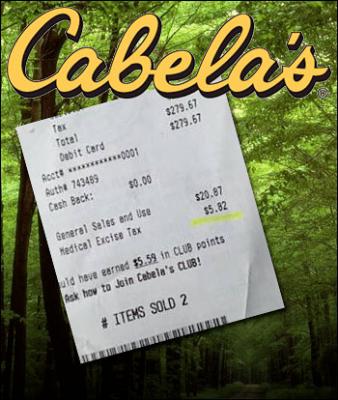 We get emails. Most of them are good – encouragement, tips, story ideas – but then there are the others...well, you get them, too. You know the ones. From your uncle or brother-in-law, or the emails circulating around your bowling league. The crazed, anti-Obama screeds. The ones that claimed he is actually from Uganda. Only the birth certificate canard is getting a bit silly, so now it's....[drum roll]...Obama Care!

Medical Excise Tax on Retail Receipts? What do you think?

This is an image of a sales receipt from Cabela's, a popular sporting goods store.

2.3% Medical Excise Tax that began on January 1st is supposed to be "hidden" from the consumer, but it's been brought to the public's attention by hunting and fishing store Cabela's who have refused to hide it and are showing it as a separate line item tax on their receipts, the email states.

I did some research and found directly from the IRS's website information that PROVES this to be true and an accurate portrayal of something hidden in Obamacare that I was not aware of! Now being skeptical of this I went to the IRS website and found this!

Q1. What is the medical device excise tax?   A1. Section 4191 of the Internal Revenue Code imposes an excise tax on the sale of certain medical devices by the manufacturer or importer of the device.

Q3. How much is the tax? A3. The tax is 2.3 percent of the sale price of the taxable medical device.

So being more curious I clicked on "Chapter 5 of IRS Publication 510." And what do I find under "MEDICAL DEVICES" under "MANUFACTURERS TAXES"? The following discussion of manufacturers taxes applies to the tax on:

When are we Americans going to learn!! Obama can not be trusted on anything!

I think we have definitely been fooled, if we believe that the Affordable Care Act is all about health care.  It truly does appear to be nothing more than a bill laden with a whole lot of taxes that we the people have yet to be aware of.

Please pass this on.  Where is our press?  I guess it's just like Nancy Pelosi said…  "We have to pass it to see what is in it."  What is next?  What else is there we do not know about?

A quick Google brings us to Snopes, the fact-checking and "myth" busting site, and the busting of this one, too. While Cabela's did indeed list a "medical excise tax" on its receipts – it was a mistake on Cabela's part.

A companywide glitch in Cabela's cash register system that added a 2.3 percent "Medical Excise Tax" to customers' purchases – everything from boots to bullets – was an error and will be refunded, a company spokesman said....

Images of Cabela's sales receipts showing the surcharge have appeared on various websites promoting several rumors. One rumor alleged that retailers had begun passing their employees' insurance coverage costs onto consumers in the form of a medical excise tax. Other sites claimed that because the tax had been applied to shoes and shirts that clothing and footwear are now considered medical devices under the new law.

Both speculations are false.

Cue the outrage against the private sector and its inefficiencies...oh, wait.

We've been here before, haven't we? The truth in this case was literally a Google search away. But that doesn't matter. The narrative fits the prejudice. And that's all some folks need.

A Letter from Ian Malesiewski

by Ian Malesiewski10/30/2018, 3:27 PM
The life-changing contrasts between caretaking programs