Boston U advances to its first Frozen Four title game. 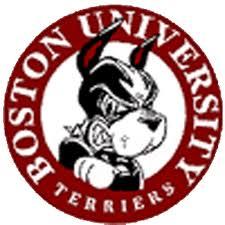 All season, Cornell used its defense to take teams out of their game, allowing just 35 goals in 34 games.
On Friday, Boston University turned the tables on the Big Red.

The Terriers limited Cornell to just 15 shots, while Jillian Kirchner and Jenelle Kohanchuk scored 50 seconds apart in the second period to give the squad their first ever win in the Frozen Four with a 4-1 in the second semifinal game Friday night at Tullio Arena.

He should be proud.

Cornell came into the contest the heavy favorite to win the tournament with a game-changing defense that has allowed just 1.03 goals per game. Coming into Friday, the Big Red has allowed just 35 goals in 34 games, the best by far in the nation.

So when Karlee Overguard put the Big Red ahead 1-0  5 minutes, 29 seconds into the first period, it seemed like the Terriers were going to be just another team in their way to a NCAA Championship.

But in this tournament, BU hasn't been like every other team. On March 12, they upset Mercyhurst College to advance to the programs first Frozen Four. And on Saturday, they would be the first team in a month to hand  Cornell a loss.

After Terrier forward Catherine Ward tied the game with 10:37 left in the first period, her team did what Cornell has done to everybody else this season – play incredible defense.

Boston held Cornell to just two shots on goal in the second period, the fewest all season for an offense that has four 20-goal scorers on board.­

While the defense was good, the surging Terriers' offense was heating up as well.

The goals by Kirchner and Kohanchuk  that beat Cornell goalie Amanda Mazzotta 50 seconds apart put the finishing touches on the most surprising win of the Frozen Four.

"We're a team," Kohanchuk said. "We have each other's backs. We just want to keep the pride (in BU) going."

The Terriers dominated Cornell offensively and defensively. BU held a 31-15 advantage in shots, and didn't allow Cornell to have more than seven in all three periods.

"(Boston) was tremendous," Cornell coach Doug Derraugh said. "We had a tough time generating anything through the middle of the ice. They played really physical and they won all of the battles."

With over three minutes to play, the Big Red pulled Mazzotta to get the extra attacker and try to move within one. But Holly Lorms scored on a two-on-one for the final goal of the game.

"I thought we were going to be in it," Overguard said. "I never had any doubts late in the game this whole year. We've been able to play through it no matter what has come our way. It's not the ending we would have liked."

Boston is the first ECHA team to make it to the Frozen Four. The Terriers meet Wisconsin in Sunday's title game at 2 p.m.