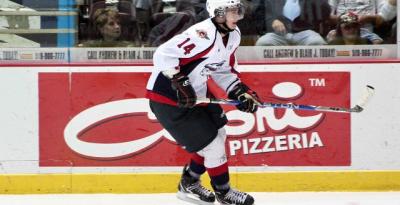 The Erie Otters simply ran out of comebacks.

After being down 3-1 in the series, Erie battled back to win two-straight games and force Game 7 at WFCU Centre Tuesday night.

The Otters once again fell behind early but erased a two-goal deficit early in the third period to knot the game at 4.

It seemed Erie had the Windsor Spitfires right where they wanted them. In their previous two games, they came back late and won in overtime.

But when Ramis Sadikov couldn't control a rebound late in the third, Windsor's Tom Kuhnhackl jumped on a loose puck and barely slid it over the goal line for the series-clinching goal with 2 minutes, 48 seconds remaining to push the Spits to a 5-4 win in front of 6,028. The Otters fell to 0-3 all-time in Game 7s.

For the third straight season, Erie's title dreams came to a halt in the quarterfinal round, while Windsor, the two-time defending league and Memorial Cup champs, advance to the OHL Semifinals against the Saginaw Spirit.

Bad starts plagued the Otters throughout the series, but Derek Holden's third goal of the series took silenced the raucous 1:46 into the contest.

However Windsor, as it has done throughout the season, responded with a pair of goals by Alexander Khokhlachev and Kuhnhackle to head to the dressing room with a 2-1 lead after 20 minutes.

The Spitfires controlled the pace, outshooting the Otters 19-11, and once again Jack Campbell looked strong in net.

It would be the same script in the middle frame, as Greg McKegg scored the first of his two goals to knot the game at 2 at 5:59.

The deadlock wouldn't stick, as Ryan Ellis and Taylor Carnevale 3:18 apart to stake the Spits a two-goal lead entering the final period.

Campbell stopped all 10 shots he faced, while Sadikov, who played below average throughout the series, stopped 30-of-34 shots in the first two periods.

But if this series proved anything, it was that no lead was safe. Erie came back from deficits of 3-0 and 4-2 in Game 6 just to win it in overtime with Brett Thompson's first playoff goal.

The Otters proved once again that they weren't going down without a fight, as McKegg tipped-in a a Shawn Szydlowski pass at the top of the crease and Tyler Hostetter rocketed a shot over Campbell's shoulder to tie the game at 4 with more than 10 minutes remaining.

The stunned Spitfires have seen this show before. Build a strong lead, just to see it wiped away by a gritty Erie club, who many predicted to represent the Western Conference in the OHL Finals before the playoffs started.

In all intents and purposes, it seemed the Otters had them right where they wanted them. They came back, had them on the ropes and were waiting to land the knockout blow.

From there both teams generated opportunities, while the defenses stayed strong, not allowing any traffic in front of either net. Both Campbell and Sadikov made key saves in the final 10 minutes to keep their respective teams in it.

With less than three remaining, Khokhlachev lifted an innocent shot towards Sadikov, attempting to just get a whistle and an offensive-zone faceoff.  Unfortunately, the Russian goaltender bobbled the puck before it fell to his right, Kuhnhackle outmuscled the defenseman, and jammed it home, effectively ending the series and the season for the Otters.

Erie would pull Sadikov with just over a minute reaming for the extra skater but could never get situated in the Windsor zone, as Ellis and company shut down the neutral zone, forcing the Otters to launch long-range shots.

Campbell ended the night with 25 saves on 29 shots.

As he ended his night being mobbed by his teammates in celebration in the crease, overage forwards Phil Varone, Anthony Luciani, and Szyslowski were keeled over with a steady flow of tears falling.

Those three ended their junior careers Tuesday night, as they will now begin their journeys in professional hockey.

Szydlowski and Luciani were mainstays in Erie throughout their careers, while Varone, a San Jose Sharks prospect, was traded from London early in the season.

Luciani led the Otters with seven goals in the series, while Varone totaled 13 points to lead all skaters and is currently tied for first in the playoffs in scoring with Oshawa's Christian Thomas.