Cleanup Efforts Bring Community Together on a Difficult Day 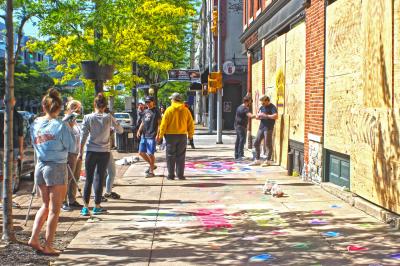 "Ember+Forge was built to be a welcoming space for our Erie community. While yesterday's events have left us hurting, it pales in comparison to the grief in our Black community."

This simple message left on social media by downtown Erie's only local coffee shop seemed to quickly cut through some of the complicated feelings that our community has been experiencing, circumventing the damaging rhetoric between protesters and proprietors. When many saw that status, they were quick to commend Hannah Kirby and the entire Ember + Forge team for a graceful message during a chaotic moment.

Ember+Forge was built to be a welcoming space for our Erie community. While yesterday's events have left us hurting, it...

After a video surfaced of a window being broken with a small fire erupting in Ember+Forge, many people reacted strongly. "Just moments after the video of the damage at E+F was spreading on the internet, I was blown away with how our community showed up for us," admitted Heather Rapp, the shop's assistant manager. "The next morning when I arrived at the shop to start assessing a game plan, our city was already out and about searching for ways to help."

Kirby and Rapp had the building owner finish boarding up the glass, while they got supplies to start cleaning up inside. She sent out a quick message and "when I got there we had about 30 people just doing absolutely whatever they could."

Zach Flock was one of those people who were quick to respond. "When I saw Hannah needed help, I reached out to others on Dramashop's Creative Team, and we were happy to lend a hand. I grabbed some brooms and gloves from the theatre, and headed to Ember+Forge to lend a hand." Flock explained that "when we saw all the plywood covering the windows, and the group of people doing sidewalk chalk, we decided to go back to Dramashop, get some leftover paint from some of our sets, and help decorate the store a bit to remind everyone that, once they're given the clear, they're open for business."

"I'm not joking, the cleanup lasted less than 30 minutes," Rapp mused. "What an example of what people can accomplish working together."

"The heart that exists behind the bar at E+F is beyond words," Rapp explained of her coworkers. "It was hard to watch that video and we were not unaffected, but our hearts are with those who have been hurting for far longer."

On Saturday, the fire was put out quickly, and since the shop is operating via a walk-up window for proper social distancing, none of the damage will affect current operations. The feeling on Sunday was one of strong community and positivity, with music blaring, and inspirational messages drawn throughout local businesses, like those from Helen Tullio. One group took the time to write words of encouragement on every location damaged on Saturday.

"At first, I think everyone was feeling sad about what happened. But as we worked to clean up the shop, I think we all felt a sense of community," Flock clarified. "One thing nobody seemed to be feeling was anger. It was cathartic to help out, even in a small way. And to see the people who were out Sunday morning because they care about our community, people brought donuts, strangers stopped to see what we were doing. It's comforting to know that, even in tumultuous times, there are good people who care about each other, whether they know each other or not."

Nick Warren can be reached at nick@eriereader.com. He could have used some clean up for his lens prior to this shoot.