Enjoy a Black & White Affair to celebrate the release of a new compilation involving some of Erie's most prolific independent artists. 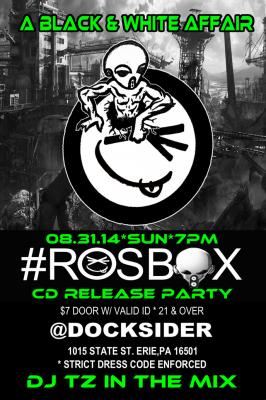 As you may have learned from the fine folks at the Erie Reader, we're big fans of local music. So when over a dozen of Erie's talented artists come together for a new release, we're going to be intrigued.

Enter Coming Out of the Box, a 20-track compilation featuring artists like 40 Under 40 honorees C. Brown and Brooke Surgener, as well as an assortment of other notable independent musicians.

The compilation itself may be a lovely enough surpirse, but that's not the only treat in store for local music fans, as Docksider Tavern will host the #ROSBOX CD Release Party: A Black & White Affair hosted by DJ TZ from 7 p.m. to 2 a.m. Sunday, Aug. 31. Given the occasion, the party has a strict dress code of fancy attire and a -- you guessed it -- black and white theme so that you and everyone else in attendance can look damn good while you celebrate the release of some great music right here in Erie.

"The important part of that is to put out a product that showcases local artists and local artists to show people that they don't have to go to Pittsburgh or Cleveland for music," says Jon Box, another 40 Under 40 honoree and entrepreneur behind The Box. "In that way, we're able to branch out to other cities. We're going to put [the compilation] on iTunes and everything like that so it can be heard and downloaded."

The Box has long been a supporter of local music and causes, helping to bring people together in a movement that Box would call "One Erie, One Love." True to form, the Release Party will feature a wide range of artists working together from LaMorvielle to Ron Yarman to Doc Proto, the latter of whom produced most of the beats found on Coming Out of the Box, as well as recording, mixing, and mastering most of the tracks.

"This compilation is something to show the youth [in Erie] that someone like Brooke Surgener can work with Doc Proto or C. Brown," Box says. "The diversity of the different genres can show them that it is possible for everyone to get along and nobody has to get bullied, like the geeks, the punks and the varsity [kids]."

Coming Out of the Box is the first of what could be several volumes of local music finding talented members of Erie's hip-hop scene working with other notable artists, but we should first start by celebrating the occasion with some artists in fine garb. Tickets for the CD Release Party are $7 at the door and the compilation and other merchandise will be available for those willing to part with a few dollars for some quality goods.