Eerie Roller Girls on the Radio!

Three Eerie Roller Girls talk about the rise of roller derby, the art of the sport, and what goes into choosing a Roller Girl moniker 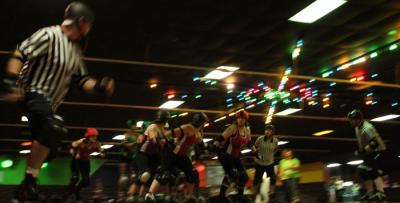 From the opening lines of his feature on the Eerie Roller Girls back in November 2011, Jay Stevens had me hooked on the sport of Roller Derby. Hell, the title alone -- Roller Girl Rampage: The Sisterhood of Skates -- was enough to draw me in -- along with a lot of other folks who found the story fascinating.

And to boot, Jay actually had so much material, he bagged the original intro -- much to my grumbling -- to make the piece as tight as possible for print. Lucky for me -- and you -- the Internets isn't quite out of room yet, so Jay posted an online follow-up about the process -- the single most important one in the act of self-determination, Jay claims -- a roller girl goes through in choosing her roller girl name.

Since then, the folks here at the Erie Reader have been keeping eyes on the team and the sport as it grows, even signing on as a sponsor for the squad. After all, what's more alt. than Roller Derby?

And we weren't alone. Mainstream media took note of the growing sport, too, signaling that this team, this group of badass women, is here to stay.

And that they are: Badass. Ryan Smith wrote about the sport last for the Reader, where words like "empowering," "feminine," "athletic," and "intelligent" were used to describe the women and their sport.

Lucky for me, three of the women were available and willing to talk about their sport on the radio, so I invited them to join me for an episode WQLN's Weekend All Things Erie, which aired Saturday, Aug. 16, but you can listen online to it here.

Without spoiling too much of the conversation I had with Hemorrhoidal Rage, Meredeath Loosewheel, and Ginger Vixxxen about the art of the sport, the changes in their league, and what went into choosing those badass names, I'll tell you two things: I had a hell of a lot of fun doing the interview, and the team has one of its final bout of the 2014 season Saturday, Aug. 23.

So listen. And then attend. And if you're brave enough, you can even take a seat in the "suicide seating."

For newspaper-related things, Ben Speggen can be contacted at bSpeggen@ErieReader.com. For radio-related matters, you can drop him a line at Ben@WQLN.org. For both -- as well as stories he shares generally about economic development, as well as pictures of his cat -- you can follow him on Twitter @ERBenSpeggen.