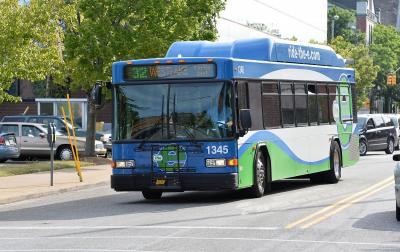 On the afternoon of June 29 , drivers of the Erie Metropolitan Transit Authority (EMTA) – who were temporarily laid off due to the COVID-19 pandemic – started picketing at the corners of 14th and State Street.

John Renwick, President and Business Agent of ATU Local 568 (Union for the EMTA and LIFT Para Transport service), when asked about the protest stated that the EMTA has breached an agreement that was put in place when 40 bus drivers and 25 LIFT were laid off earlier this year due to the COVID-19 pandemic.

According to Renwick, the agreement between the EMTA and ATU Local 568 held that all drivers would be reinstated in June, however, the EMTA has only re-called 19 drivers (since June 13)  and will not allow the other laid-off drivers to bid on work. In addition, Renwick cites that the EMTA is "threatening to take away drivers' healthcare," and has refused to meet with any ATU Local 568 representatives. When asked about a potential strike, Renwick stated that they would not be striking.

However, only time will tell what will happen between the EMTA and its employees.

EMTA CEO Jeremy Peterson noted that the company had extended the temporary layoff clause by 30 days – which would extend it until mid-July. "We were forced to reduce our service based on our ridership and the data that we can easily analyze throughout this pandemic," Peterson stated, explaining that ridership has dropped from between 7,000-10,000 riders per day to between 1,200 and 1,600.

If a strike were to occur, it's extremely important to note that it would disproportionately affect Erie's east side and inner-city communities; the east side has already seen devastating results since the viaduct was torn down by the City of Erie earlier last year.

This article originally stated incorrect figures and has been edited.