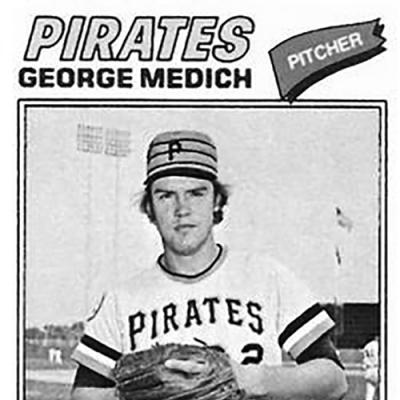 IN MY MORE THAN 40 years of covering sports, I have interviewed a slew of athletes; several I perceived as total jerks, many were interesting but not too exciting, while a number of them were entertaining and enjoyable – and memorable. Recently on my talk show, I had an in-studio guest that was entertaining, enjoyable – and memorable. And he was a former New York Yankee no less.

I have to admit when I was told former Yankee George "Doc" Medich was going to be coming to the 1330AM The Fan studio for an interview, it was almost impossible for me to put my extreme loathing for the NY team aside. My first concern was for my own behavior, as I have never been rude to a guest in my life, and I didn't want to break the streak. But sitting with a Bronx Bomber was certainly going to put me to a test.

And I would be a liar if I didn't admit I was hoping he would turn out to be one of the biggest jerks I've ever interviewed.

After meeting the Aliquippa native (Hopewell High School grad), I am proud that I still have never been rude to anyone (on the air), but I guess, much to my displeasure, as embarrassed as I am to admit it, Medich wasn't one of the biggest jerks I have ever interviewed. As a matter of fact, it almost pains me to point out that the ex-New York Yankee is on the other end of the spectrum. He is extremely likeable, very personable, and truly humble.

I have interviewed so many people over the years, it's not hard to get a feeling if they want to be there or not. The first question from someone who is in no mood to being interviewed is usually, "How long is this going to take?"  Doc's first comment was, "I've always liked Erie.

"A friend of mine used to take me fishing in this area a lot, and I really enjoy the people. It's a great sports town, and I can stay on as long as you need me."

And he stayed for nearly an hour, and I must point out it was one of the most enjoyable interviews I've ever had.

And just for the record, if I didn't think much of him I probably would've kept that to myself, as he poses quite a presence. Medich, who stood 6-5 and weighed in at 225 when playing for the Yankees, Pirates, A's, Mariners, Mets, Rangers, and Brewers, still looks totally capable of twisting someone into a pretzel whom he found offensive – as in a smart-mouthed talk show host.

He was extremely soft-spoken, but once he started conversing, I learned several interesting things, including the fact he went to the University of Pittsburgh on a football scholarship and was a three-year starter as tight end for the Panthers, while also handling the punting duties.

He was also a three-sport star at Hopewell High, but basketball fell by the wayside, and when he was at Pitt, baseball finally became his dominant sport, as he established himself one of the top hurlers in the East while performing for the Panthers.

It was his mound work at Pitt that caught the attention of the Yankees, but he still wasn't considered a future star, as the New Yorkers used their 30th pick in the 1970 draft to select him. He spent just two years in the minor leagues before getting the call to the bigs, the hard-throwing right-hander then going on to post an overall record of 124-105 for seven different teams.

Medich, who earned the nickname "Doc" because he attended medical school in the off-season, finished his career with a fine earned run average of 3.37 while compiling 955 strikeouts.

The Aliquippa native still had some years left on the diamond, but he retired from the sport to devote himself to his career as an orthopedic surgeon.

He also enjoyed talking about his high school days, and he still has fond memories of those days from the Aliquippa area, which he points out with a lot of pride, commenting, "The people in the area loved their high school sports, and if you ever wanted to rob a bank down there, Friday night was the perfect time.

"People jammed the high school stadiums on Friday to watch their favorite teams."

He also spoke with great fondness of Aliquippa native Mike Ditka and his brother Ashton. "No one messed with the Ditkas," he explained, "and Aliquippa was a tough town."

Medich also enjoyed telling a story about a Yankees old-timers game at Yankee Stadium when he went to his locker before the game and some one was sitting in his chair. "I had a bit of an attitude when I was ready to tell the guy to move," he laughed, "and Mickey Mantle looked up and asked me if I could just wait another minute so he could get ready for the game."

The ex-Yank added, "Mickey and Whitey Ford were two of the nicest guys I met while playing baseball." Ford was the NY pitching coach when Medich was with the Yanks.

As usual, I felt compelled to share with him some of the nice people I've met in sports and some of the ones I perceived as jerks.

I told him the story how I had the unfortunate incident of meeting former Cy Young Award-winner Pete Vukovich, and what a total [fill in the blank here] I thought he was. Medich laughed and told me, "He's one of my best friends." I of course laughed and then wiped the smile off my face when I figured out he was serious.

Fortunately, though, Medich didn't feel a need to defend his friend's honor, and I thought this would be a good time to finish the interview while I was still unscathed.

With all this being said, the main reason Medich was in Erie was to talk about UFOs, a subject that is extremely near and dear to him. He has as many interesting stories on that subject as he does on sports.

But that's another story for another time.

I have to admit that Medich was extremely enjoyable and classy, so I have decided to look at him as an ex-Pirate and not an ex-Yankee.

I feel much better about myself, and I'm still able to continue my incredible hatred I have for the "Pinstripers." ESPN would like that term.

Ex-Pirate Doc Medich – what a guy!

ER Sports: JRL is on a roll!

by James R. LeCorchick10/28/2015, 2:45 PM
After making predictions for football games for over 40 years, there are numerous weekends I have blocked out of my mind.