After participating in Saturday's protests, Nicholson was charged with assault of a law enforcement officer, rioting, and possession of incendiary material 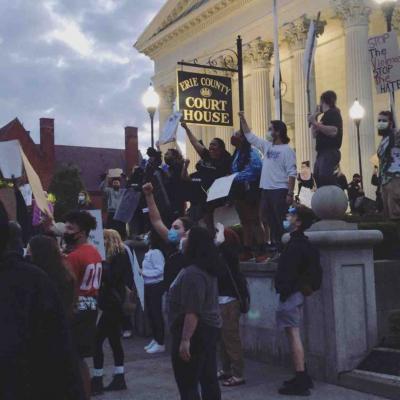 Saturday evening, the streets of downtown Erie became host to a peaceful protest as members of the community gathered to demonstrate resistance against police brutality in the wake of George Floyd's death.

As the sun began to set, tensions began to swell. Property and signs were damaged, walls were spray-painted, and windows were shattered. Resistance from the crowds escalated leading to a standoff between the police and protesters. Fireworks, tear gas, Mace, and chants for justice filled downtown Erie.

In a video that has been now shared around the world, an Erie officer kicked 21-year-old Hannah Silbaugh to the ground after spraying her in the face with Mace as she refused to move from her sitting position, blocking officers from moving forward.

Among the eight people charged and arrested for Saturday night is 28-year-old Erie resident Tyvarh Nicholson who is currently being held in the Erie County Prison on a $25,000 bail. According to his criminal complaint, police accuse Nicholson of assault of a law enforcement officer, riot, and possession of explosive/incendiary material. Specifically, police said he was seen attempting to light a Molotov cocktail, an improvised explosive.

On Wednesday, Darcie Luikart created a GoFundMe campaign to raise $2,500, 10% of Nicholson's bail, in hopes to alleviate his family of some financial strain.

Luikart, a member of a young progressive group working to ensure safety at future demonstrations, was there Saturday night working in a team that operated as the main medic on site. She said when the protest was soured by Erie Police Department tear gas, she assisted many attendees caught in the crossfire with medical aid, even being tear-gassed and hit with rubber bullet debris herself.

Though Luikart said she does not personally know Nicholson, she stands with him in solidarity after his wrongful arrest. The GoFundMe page explains "as the momentum grew, one of our own black community members, Tyvarh, was arrested for standing his ground and protecting other peaceful protestors."

Luikart said she recognized her job as an ally was to use her privilege as a white woman to do anything in her power to get him out of harm's way.

"I don't know Tyvarh, but I do know the national public health crisis of young black men dying at the hands of cops speaks for itself," explained Luikart. "His intentions, as everyone else's, were to unite the greater Erie Community and take a stand against police brutality toward the black community."

In terms of how Erie mayor Joe Schember is handling protests and public demands, Luikart said she could not imagine a more worst-case scenario. She criticized Schember singing Petula Clark at a previous press release "like we all understand the late 1960s references but now he knows the graphic skills to video-alter heavily pixelated cell phone camera videos."

"An out-of-touch mayor claiming multiple cell phone videos from multiple angles to be doctored within minutes of posting on social media was the worst statement he could have made," Luikart said on Silbaugh's recorded assault. "I didn't believe it could actually get worse from the immediate 'no comment,' but he was able to surprise us all."

Six hours after its creation, the GoFundMe for Nicholson's bail has raised over $400. It now stands nearly halfway funded.

"Not letting our community members sit in police custody is part of telling them that we WILL NOT BE SILENCED," reads the fundraisers description.

Despite an early lack of action from the mayor and Erie Police Department, Luikart is enthusiastic to see members of the community donating to Nicholson.

"I am filled with hope and joy experiencing the willingness of Erie natives and those who have shared across the country uniting to help a young man from our community fight the system set up for him to fail," Luikart said.

You can find the GoFundMe for Nicholson's bail at here.