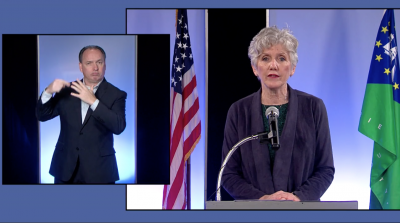 Encouraging news on the COVID-19 front from the weekend was tempered by "disappointing" reports from a protest rally in Perry Square Monday afternoon, as Erie County Executive Kathy Dahlkemper delivered her daily update.

Since Saturday, no more positive tests for COVID-19 has been recorded, although four more individuals were tagged as "probables" — exhibiting symptoms and with known direct contact with a confirmed positive, but with results still pending. With those individuals factored in, Erie's total count wound stand at 60, with 29 recoveries and 31 active cases, and no deaths.

Statewide, there have been 948 new cases and 92 new deaths in the past 24 hours, adding up to 33,232 positives and 1,204 deaths. Crawford County has seen 16 total cases, McKean County four, and Warren County one, with no deaths, recorded. Neighboring Chautauqua County in New York currently stands at 27 positives (three deaths); Ashtabula County in Ohio stands at 66 positives (five deaths).

The local numbers have been low, Dahlkemper said, because of how well we're doing countywide in following social distancing best practices. With masks now being a mandatory accessory of one's public wardrobe (and will be for a while), she implored citizens to adjust and educate themselves on what qualifies as a mask —  e.g. "anything that provides a barrier between the nose and mouth and other individuals," such as a scarf or bandana. Erie County is continuing to work with the state and employers to provide both the physical and educational resources for masks, to "help all of us develop standards so we can get back to work."

That won't be for another few weeks at least, as Governor Tom Wolf's stay-at-home order was extended to May 8. The reopening process will be very gradual, and compliance will be easier for some businesses than others. "The concern is people becoming complacent too quickly ... make no mistake, COVID-19 is here, and it is very, very dangerous."

Dahlkemper cautioned that large gatherings and events over the summer would be unlikely, and that any form of public congregation should be handled responsibly. "We never wanted to do things punitively," but instead as a partnership, she said, clarifying the county's willingness to work with organizations who want to assemble as their constitutional right, so long as they remain peaceful and respectful. Monday's protest at Perry Square involved some 75 to 100 individuals pleading for the reopening of the economy. Many were not observing social distancing or wearing masks.

She rearticulated that officials are listening to scientists and doctors and making decisions based on protecting the public health and welfare, not protests. She expressed the hope that Erie County would serve as an example of how to demonstrate (as is one's right) responsibly, and that we wouldn't see our progress toward reopening the economy unravel due to a spike in numbers.

"I understand people's frustrations," she said, "but I hope everyone is using best practices."