by Nick Warren
View ProfileTwitterInstagramRSS Feed
May 11, 2020 at 4:17 PM 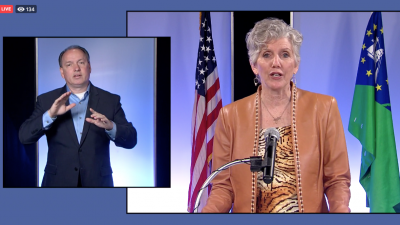 Erie County Executive Kathy Dahlkemper, in her regular address, reported that there were six new positive cases of COVID-19 since Friday. One is in their 20s, two in their 30s, one in their 50s, one in their 80s, and one is under the age of five. Three of the cases are in Zone one (the City of Erie), one in Zone two (Millcreek), one in Zone three (the northeastern portion of the county), and one in Zone five (the western portion of the county). All of these new cases were said to be linked to known positives.

This brings our cumulative count to 120 positive cases, with 2,680 negatives, and two deaths. So far, there have been 84 recoveries, for a total of 36 current active cases.

Dahlkemper noted the discrepancy between the county's reported number and the state's, which lists Erie's total cases at 123. She noted that the state's data is entered by a number of sources in the form of raw data, which then needs to be reconciled and confirmed. This is not the first time that these numbers did not coincide, though each time, it takes a day or two for the numbers to match.

"No one is making up any results, no one is hiding any data, we have been transparent with you from day one," Dahlkemper clarified.

Chautauqua County is at 42 cases (up two) and four deaths. Ashtabula County has 192 cases (up 23 from Friday) and 18 deaths.

Dahlkemper noted that the environmental task force responded to a number of complaints over the weekend, though – despite Erie County entering the Yellow phase on Friday –most were related to personal gatherings.

Dahlkemper also took the time to specify a few specific scenarios, to help answer any possible questions about masking.

In interactions between a positive carrier of COVID-19 (knowingly or not) and another person it follows that:

Both unmasked = high likelihood of transmission

Carrier unmasked, other masked: slightly lower, but still a high likelihood of transmission

The County Executive also addressed the particular business brought up last Friday, wherein six people were known to carry COVID-19. She stated that to her knowledge, none of the businesses mentioned on social media were the correct business, though she explained that she had no plans on divulging the identity of the business.