by Nick Warren
View ProfileTwitterInstagramRSS Feed
May 18, 2020 at 3:35 PM 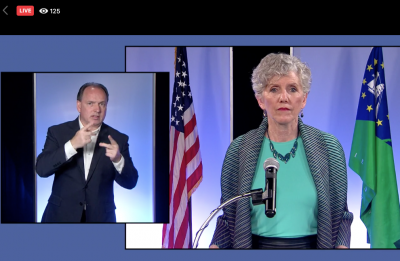 Erie County Executive Kathy Dahlkemper reported that there were 13 new positive cases of COVID-19 in Erie County since Friday. One of these individuals is in their 80s, one in their 60s, four in their 50s, two in their 40s, three in their 20s, one is in their teens, and one is between ages 5 and 12. Five of these cases reside in Zone one (the City of Erie), four are in Zone two (Millcreek), one is in Zone three (North East, Harborcreek), one is in Zone four (Union City, Corry), while two are located in Zone five (western Erie County including Edinboro, Fairview, and Girard). All but three of these cases are directly related to known cases, Dahlkemper explained, also citing that many were connected to Mother's Day gatherings.

The cumulative positive cases for Erie County is now at 143, with 3,111 negatives (156  more than Friday), with 50 new cases in the last 14 days. There have been 106 recoveries to date, for a total of 37 current active cases. So far, three Erie County residents have died due to COVID-19.

Dahlkemper also noted that May 18 is the last day to register to vote for the PA primaries on Tuesday, June 2. This can be done online at votespa.com, and must be done before midnight.

The deadline to apply for a mail-in ballot is next Tuesday, May 26, and can be done online as well via pavoterservices.pa.gov.

So far, about 28,000 people have applied for absentee and mail-in ballots, though Dahlkemper cited that the county has only received approximately one quarter of them back at this time.

Under PA's Act 77, If you have applied for a mail-in ballot and do not send it in, you will be provided with a provisional ballot on election day at your polling location.

Dahlkemper also noted that many elderly poll workers have declined to participate in June's election due to safety concerns. The county is looking for volunteers to work between 6:30 a.m. and 8:30 p.m., paying $125 per day. Interested parties are encouraged to call (814) 451-6303 to volunteer, or email Erie County Clerk Doug Smith at DSmith@eriecountypa.gov.