by Nick Warren
View ProfileTwitterInstagramRSS Feed
May 26, 2020 at 3:42 PM 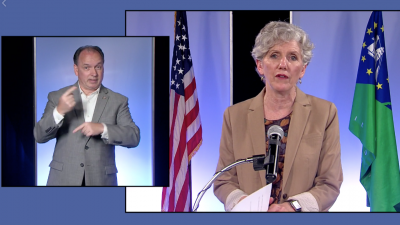 Erie County Executive Kathy Dahlkemper returned to her live press conferences, following the Memorial Day holiday to report 25 new positive cases of COVID-19 since Friday. Of these, 17 cases are located in Zone one (the City of Erie), three are in Zone two (Millcreek), two are in Zone three (North East, Harborcreek), two are in Zone four (Corry, Union City), and one is in Zone five (Girard, Fairview, and Edinboro).

With a breakdown of 15 cases on Saturday, two on Sunday, and eight on Monday, this brings the county to a total of 216 cumulative positives, with 4,068 negatives (410 since Friday), and 127 recovered cases (for a total of 85 current active cases). So far, there have been three deaths of Erie County residents reported due to COVID-19, with a fourth still being reported by the state, and discrepancy of seven positive cases, the state reporting 223.

Dahlkemper was quick to note the difference between numbers, and added that "we're reporting the information that we have as of yesterday at 3 p.m. while the contact tracers at the Erie County Department of Health continue to do the work from a very long and busy weekend." There have been several small discrepancies in data over the course of COVID-19 reporting, most of which are quickly resolved.

Our stateside neighbors saw a sharper spike, as Chautauqua County has 75 cases (up 15) and four deaths. Ashtabula County has 263 cases (up 18) and 32 deaths, with nine more reported since last Friday's update.

"At this point, it appears that our cases are not clusters related to any businesses so far," Dahlkemper detailed. "Our cases, generally, are related to people gathering not wearing masks, not social distancing. Remember that it is the prolonged exposure to others who do not live inside of your home that increases your chances of picking up COVID-19 and being sick."

"We have not gone into the Green phase here in Erie County yet because – contrary to what's happening in some other counties in our state – our numbers are now going up, not down. Our number needs to level off, or even better, decrease before we go to Green," Dahlkemper explained.

"On another note, it's been reported in the news that an individual over the weekend was arrested for alleged illegal activity," Dahlkemper relayed. This individual was not known to us at the County Health Department, had not been tested for COVID-19, was not positive, and was not anyone in our contact list either. But apparently the individual told the arresting officers that they had been exposed to COVID-19 and might have it." A rapid-test at Hamot proved that they were positive. They were then transported to Erie County prison in a negative air-flow room to protect the other prisoners. Five Erie Police Department officers involved with this arrest are now under quarantine.

The environmental team received 19 complaints over the weekend, many regarding customers not wearing masks.

Dahlkemper also wished to acknowledge two "star players of the day," highlighting model businesses who are following precautions impressively. She commended the Lawrence Park Dairy Queen, with helpful signage and a strong "no mask, no service" policy, including customers simply pulling up their shirt to poorly recreate a mask. She also mentioned Scotland Yards Greenhouse in Edinboro, with their helpful staff.

Dahlkemper stated that so far, she has had no confirmation from the state regarding Erie County's possible move to the Green phase on June 5.

There will be no regular updates this week until Friday, May 29.