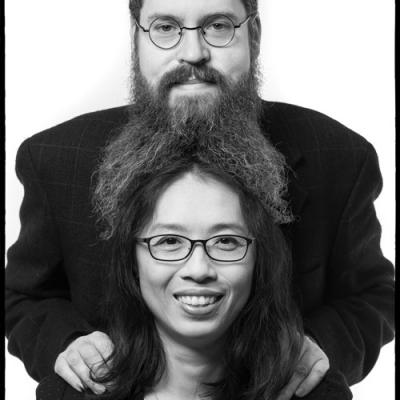 "We want to create a world of happier, healthier, well-rested people."

Ed Bernik: Your website is so fun, and not what I was expecting for a tech company. Tell me about your corporate philosophy.

Jason Wolfe: We are the softer side of tech, is how I look at it.

Wei-Shin Lai: Even though we are in the consumer electronics audio sector, our emphasis is just helping people sleep better. That's the goal, and our mission statement is that we want to create a world of happier, healthier, well-rested people.

EB: Do your employees use your SleepPhones®?

WSL: Quite a few do. Even if they don't have trouble sleeping, they often have a relative, a friend, or even children who use the product to help them sleep.

EB: Jason, how does your background in video game design help you in developing the product?

JW: It helps me see how the parts of a business go together and are administered, creating a bit of a narrative. It also helps with the content and design of the product. Designing a soundtrack to help people sleep and designing soundtracks for games have a lot in common. It's that interactive experience that you're sharing with someone.

EB: Wei-Shin, you are a physician with a degree in cellular molecular biology. Do you miss the solitude of doing research, now that you're thrust into this very frenetic business world?

WSL: I've always wanted to help people, and that's why I went into medicine in the first place. The cellular molecular biology was actually to help me study the Ebola virus, because that's what one of my goals was: to become a CDC epidemic intelligence officer, to go to Africa and stamp out one of the scourges of the world. But I found that seeing patients was more rewarding. Connecting with people one-on-one was a little more fun. But when the business started and really took off, I realized that it was actually more impactful to focus on the business, because then I'm helping hundreds of people sleep better every day, rather than just seeing individual patients and prescribing potentially addictive drugs to help them sleep.

JW: I would definitely describe sleeplessness as yet another scourge of the world. Maybe not on par with Ebola, but it probably affects more people.

EB: How did becoming entrepreneurs change your lives?

WSL: One of the things I've always known about myself is that I wanted to be more in control of whatever profession I went into. Being an entrepreneur feeds into that. Being a doctor, too, helped me as an entrepreneur, because it taught me how to listen to people better and to always focus on the ultimate goal. That primary goal translated into always doing what's best for the customers.

JW: Rather than a change, I see it more as a logical extension: We are always learning and asking questions. I think that's something that you do naturally in the field of medicine and definitely in the field of video games.

EB: At what point did you know that AcousticSheep was going to be successful?

JW: We've always known. At the beginning we had doubts. We have different doubts now, but we've always been fairly confident.

WSL: There's a concept out there that entrepreneurs are risk-takers – and we're not. You don't want a doctor who's a risk-taker. We always take calculated risks, so if we ever had any doubts we always hedged our bets and kind of knew that things couldn't go terribly south. This business started in 2007, so for the first five years we weren't taking any risks because we still had our day jobs and this was more of a hobby. But after we grossed a million dollars, it wasn't a risk to switch over.

JW: We don't take on battles unless we're pretty confident we can win. Always go in with a winning force. That's the way I look at it.

EB: Is there a market for your product in healthcare?

WSL: Absolutely. In fact, a lot of our customers write in and say that they have a particular condition and this has helped them with it – and not just insomniacs who've been able to come off of sleeping pills. It's also people who were undergoing chemotherapy, saying that every time they went in for the treatments it was really stressful, and this helps with chemo-anxiety. So recently we donated a few hundred headphones to the Regional Cancer Center to give out as Christmas presents to patients undergoing chemo.

Also for people in the military who have sleep issues associated with perhaps living in a barrack, hearing noises throughout the night while they're deployed – or even back home, some of the stresses that they have to deal with, including PTSD or Traumatic Brain Injury.

JW: My favorite stories are when people are helped from the terrible health condition of having a spouse who snores. We are very proud that we've saved some marriages.

EB: Audio plays such a large part in our lives. Do you see branching out into other areas besides healthcare?

JW: We have a lot of ideas that we'll bring to fruition as we have the resources to do so. I'm very excited. It's a lot like video games. You're setting a mood. You're communicating a situation. We do some things with guided imagery tracks, setting a soundtrack to ease people into the state they want to get to.

EB: What gets you really excited about going into work?

JW: The tweaking: Making the business processes just a little bit better by optimizing what you can. Once you see the things work better, it's great.

WSL: It's seeing the employees at work, and seeing how we've set things in motion to help some of these people be productive and contribute to something that's really great.

EB: You've won a ton of awards. Is one most meaningful to you?

WSL: We've had two really major awards. One was the Small Business Administration Entrepreneur of the Year for Pennsylvania, and for that we were able to compete nationally in Washington, D.C.

JW: It was an amazing array of different businesses and people we got to learn a bit about, to see what they were up to and compare some notes.

WSL: The second was Ernst and Young Entrepreneur of the Year for West Virginia and western Pennsylvania. It's a regional award, but then we go to on to nationals as well, and that was in Palm Springs in November. The caliber of the other participants was just really amazing.

EB: Since you started the company, do you get more sleep now than you did in your previous jobs?

JW: When our heads near the pillow, we're asleep, though that may happen less often now.

WSL: Our newest product, available on our website, is the SleepPhones® Effortless, with induction charging. So it's basically a bluetooth headphone, and instead of having to plug anything in, you just put in on a surface and it will charge through the fabric.

There's a Tincture For That