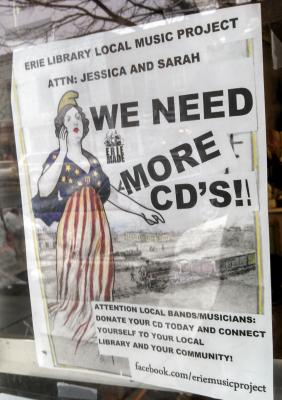 The Erie Library Local Music Project was launched in late 2015 as a vehicle to make Erie-made music -- past and present -- publicly available for borrowing, and archived and preserved for posterity as part of the community's history.

In short, a really great idea.

As it stands -- at about 50 CDs and counting -- "We have rock. We have hardcore. We have indie," says project co-creator and Blasco Library staff member Jessica Makowski. "We have some folk stuff, we have pop. We have a CD that is, I believe, chiptune. ...There's some gospel. There's some metal."

Beyond that, Makowski says, she and the project's other creator, Sarah Brown-Millspaw, have also gathered up other genres: Jazz -- "lots of jazz" -- punk, acoustic, alternative rock, and more.

That's a plenitude of in-and-around-Erie tunes, alright, but there have been more -- plenty more -- than 50 or so albums recorded by local (that is, Erie County-based) artists and bands up and down through the years, right?

For sure. And the Local Music Project wants all of it, every last number, to be put on the Erie County Public Library system's shelves.

"I think it's super cool that we have such a variety" of local music already in place, says Makowski. But more material by local artists is "out there. We just need to find [it]."

The collection, to which local musicians can easily add their CD(s) to any time, is being built up in advance of the Project's official public release of the materials next month, according to Makowski.

Erie and its surrounding area really do comprise a robust, thriving, and diverse music scene. And a lot of it is really good stuff, plenty worth checking out and giving a listen. And that's probably more true now than ever before.

That said, "we're really just trying to connect the library to the musicians, and [the musicians] to the public," says Makowski.

Like we've said before, the Local Music Project is one of many things in the works in the local system that could help us rethink what the library (that is, the amazing library right here in Erie, and all its fine branches throughout Erie County) is, and what it's for.

Musicians may drop off their CDs (in bags to protect cases) at any Erie Library branch with a note specifying "Blasco Library, ATTN: Sarah and Jessica."

Feel free to message The Erie Library Local Music Project via Facebook with any questions, too, and, you know, it's the library, so everyone's welcome to stop by.