Indoor football isn't new to Erie, so the young Explosion team looks to become a mainstay in the Erie sports scene.

by Jay Stevens
View ProfileFacebookTwitterGoogle+RSS Feed
May 27, 2011 at 12:00 AM 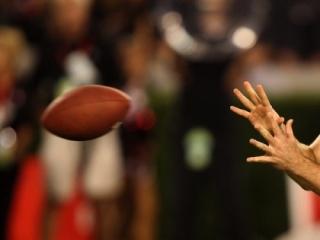 The hit came as the ball bounced off Erie Explosion receiver Tirone Morris' hands, squirting away over the floor and bouncing in front of the seats. The hit was late – not late enough to earn a  flag – but certainly after the pass had been tipped away and while Morris was still airborne on the left side of the end zone and his hand extended like he was hailing a good friend. The defensive back's shoulder bore squarely into Morris' lower back and drove the receiver waist-high onto the wall, where he hung like a towel thrown over a shoulder while the defender kept pushing him in attempt to dump him over. The referees trilled their whistles the way they do when they want to get your attention, and the Trenton Steel player stepped reluctantly away from his unfinished business and let Morris down. Morris paused a moment – reflective? in pain? – then padded back to the huddle.

There was slightly more than 40 seconds on the clock before the half, and the Erie Explosion was trading scores with their Southern Indoor Football League division rival, the Trenton Steel. A touchdown here and now was crucial to Erie's season. A win tonight meant a two-game lead with three games to play and a near-lock on a playoff berth.

"I wasn't even worried about the hit," Morris said, after the game. "I was more mad at the fact I dropped the ball." In the huddle, he signaled to the bench for the ball, and the coach called a post corner for him. The center snapped the ball to the quarterback, Morris ran to the back of the end zone where he was wide open. Touchdown. 43-35, Erie. Trenton never got any closer, as Erie went on to take the game, 90-79.

"It was painful," said Morris of the hit against the wall. "But, you know, I've got to suck it up. It's arena football. You got to be an iron man in this sport."

The wall is an ineluctable feature of indoor football, no doubt as certain and inevitable to wide receivers as death and taxes are to the rest of us. The wall is a promise of possible brutality, of bodies flung into the laps of rooters, of hard runs ended abruptly. The wall adds a dark edge to a sport defined by its 50-yard field, eight players to a side, and the wide-open offense that its dimensions spawn. Arena football is all about passing and fleet-footed receivers running elaborate patterns that begin as far back as twenty yards behind the line of scrimmage. Until, of course, they run into a wall.

And one of the better offenses in a league dominated by offense belongs to the Trenton Steel, which gave the Explosion trouble throughout the game, led as it is by quarterback EJ Nemeth and his primary receiver, Oderick Turner. Turner was a former standout at the University of Pittsburgh and was even considered by several NFL teams in the draft before an injury hampered his chances. At 6'3", Turner stood a full half head above the tallest Erie defender, and as a former high school high jump champion, he had no trouble with the Erie defense, catching passes for 225 yards, a league record.

When asked about how he worked to defend Turner, Explosion coach Shawn Liotta revealed an unusual  strategy: "We got in at halftime," he explained, "the strategy was, we've got to keep scoring. That was our mentality. If we don't stop scoring, we can't lose."

Erie, too, has one of the best offenses in the league, and it executed Liotta's strategy with near perfection. Centered around the quarterback-receiver tandem of Adam DiMichele and Keven Concepcion, the Explosion scored a touchdown on every possession in the game, save one: a botched field gold attempt with 5 seconds remaining in the first half.

DiMichele's talent was evident in the pregame warmups, lofting elegant spirals to receivers running sideline drills. If the former Temple quarterback's perfect touch with the ball and intelligence in play-making was akin to art, then Concepcion proved himself to be the perfect canvas, a smooth-running receiver with sure hands and a knack for vanishing from the field and reappearing in the end zone in the perfect spot for hauling in DiMichele's touchdown passes with diving fingertip catches. On the night, Concepcion also set a league record of his own, with seven touchdown receptions.

But the remarkable thing about Erie's win was that it came as an all-around effort. Liotta agreed. "There was smart decision-making by the quarterback," he said, "the wide receivers made some great plays, and the o-line and fullback blocked well and were able to give us time.

Indeed, the contrasting play of the two offensive lines was probably the deciding factor in the game: the Explosion's line consistently gave DiMichele time to find his receivers, while Trenton's weaker line forced Nemeth to scramble often and take a number of hits, including five sacks – one of which turned the ball over to Erie on downs and represented the difference in the score.

In the end, however, the Explosion victory represented more than a critical division win, it also struck a blow for the franchise itself and for the future of professional football in Erie.

Indoor football is not new to Erie. Before the Explosion, Erie had two other teams play at Tullio Arena: the Invaders and the Freeze, both of which saw success but were dissolved over issues with league stability and ownership structure. The current team moved to Erie from Pittsburgh for the 2007 season when the Freeze folded, eager to make the downtown arena – an excellent indoor football facility – their home. Since arriving, the team has had three names: the River Cats, the Storm, and the Explosion. This year, too, the Explosion is playing in a new league, having joined the SIFL as part of a merger with the American Indoor Football League. Obviously the team needed to create some continuity, and an identity for itself, and attract regular fans.

Name changes and marketing campaigns are all well and good, but in the end it's the quality of the show that matters. "As you saw," said Stafford, "we have a product that proved itself on the field."

No doubt a long run in the playoffs would peak the interest of the fans. Winning is everything.