A night after being pulled, Chris Festarini earned his first career OHL vicotry in a 27-save performance. 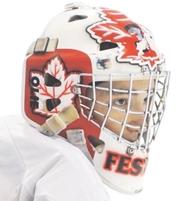 What a difference a night makes.

A game after being pulled after allowing five goals on 14 shots against Peterborough, rookie goaltender Chris Festarini made a statement of his own – he can compete at this level.

Festarini stopped 27-of-28 shots, while the Erie Otters defeated Midwest Division rival Kitchener 2-1 in front of 4,322 at the Tullio Arena. The win was the first of Festarini's Ontario Hockey League career.

"Other than getting drafted, this is the best moment for me," said Festarini, who entered the contest with an 0-8-0-0 record in 14 appearances this season.

As injured Ramis Sadikov watched from behind the glass, Festarini was busy stopping shot after shot from the Rangers, who have scored 248 goals as a team this season, third best in the Western Conference.

His only blemish on the night came when Tyler Randell deposited a loose puck on top of the crease 6 minutes, 40 seconds into the first period. From there, Festarini smothered the rest of the Rangers' opportunities throughout the night.

"He gave us a chance to win tonight," said assistant/goaltending coach Peter Sidorkiewicz. "It's been a long time coming. Until you get your first win, you're always doubting yourself. All the credit goes to him, it's not that easy."

Before the game, Otters general manager Sherry Bassin met with Festarini and the team to screw their heads on straight a night after losing to a rebuilding Peterborough squad.

"It's just a typical Bassin speech," Greg McKegg said. "He always wakes us up when he comes in (the locker room). It was just a regular (Bass) moment."

Apparently the speech didn't register until the final minute of the opening period.

In a span of 17 seconds, Anthony Luciani and McKegg beat Kitchener goalie Brandon Maxwell to turn a 1-0 deficit into a 2-1 advantage.

On the eventual game-winning goal, McKegg redirected a shot that David Shields unleashed from the blue line as the puck just tricked between Maxwell's pads before inching its way over the goal line.

After that goal, Erie concentrated on the defensive side of the game, limiting Kitchener to just 19 shots in the final two periods and helping Festarini in front of his own net.

"You don't want to get in a shootout with the Rangers," said McKegg, whose goal gave him a team-leading 41 on the season. "They have a lot of skilled forwards, and they score a lot of goals offensively. We thought if we could get them to turn the puck over, it would be to our benefit."

After a scoreless second period where both teams registered nine shots on goal, the Rangers controlled the play throughout the majority of the third period.

The Otters played dump and chase hockey, concertinaing on not breaking down defensively to ensure that Festarini would earn his first win as an Otter.

It was easy in the third, but Festarini stopped all 10 shots he faced, including several by Gabriel Landeskog, a potential Top-5 pick in this year's NHL Entry Draft.

Apparently Festarini was in the zone because he "didn't even notice" Landeskog out there.
"He's worked hard all year," McKegg said of Festarini. "He showed his skill out there tonight. He's a good goalie and he played well for us."

With the win, which broke a two-game losing streak, Erie's magic number to clinch a playoff spot dwindled to two points.

But on this night, it wasn't about watching the scoreboard, it was about watching Festarini celebrate as the team mobbed him after the final horn sounded.

After being selected as the games No. 1 star, Festarini took a page out of Sadikov's book and did a Superman dive at center ice. A well-deserved celebration for the often underestimated goalie.

But even with the much-needed win, personally and for the team, Festarini doesn't plan to get too caught up in the moment.

"I have to remain even keel," he said, "and just come out ready when it's my time to go."