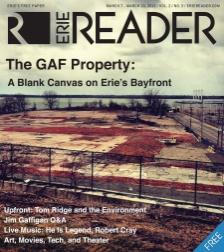 Local architect and City Councilman Dave Brennan sent me an elephant the other day.

In fact, he emailed it to me.

What? You don't believe me? Okay, well, it wasn't really an elephant. But the truth in what he said was so obvious it was like an elephant. The elephant in the room, if you will.

His view of what Erie's Bayfront needs, is bright, practical, and has great tusks. This elephant I'm talking about, is Dave's plans for the GAF site.

On the off chance you're reading this and don't know already, Erie is staring down the barrel of some huge decisions. As if the slow, painful collapse of the American manufacturing industry wasn't enough of a gut-check for the country in general—or specifically the Rust Belt in specific—companies continued leaving Erie even after the initial industrial firebomb started to cool.

But then there was the Great Recession. Yup. Another large-scale, economic catastrophe. As if we needed one.

But it didn't stop there. In the middle of all this, another huge employer, Erie's GAF  Materials Corp., announced it was closing its doors. 2007 came; and Boom: 150 jobs. Like that. A gaping 12-acre hole left in the landscape, and an even bigger one in the hope for a vibrant local economy.

So, the Erie Convention Center Authority, seeing the tremendous value of the now-empty lakefront spot, quickly wagered a few mills to clean up the site and make a move for growth. Early this year, they released a tentative map for what they plan to do there, only not everyone's so sure this tentative blueprint is quite the Golden Ticket Erie's looking for.

Though touted as a mixed-use property, it's set up to be mostly housing. The plan includes one commercial building, parking, a hotel (even though there's already a new one nearby, plus there's a promise from a local developer to build yet another in the area.), and some mansionettes.

Brennan's plan not only saves a place for all of the Convention Center Authority's original concerns, his plan promotes social interaction instead of cold isolation, includes possibilities for varied, dynamic commercial growth instead of narrow focus on limited types of industry, and sows seeds for a bold new vision of Erie. A place for people (not just the rich ones), families, and fun.

But wait, there's more! Dave is also planning a charette, which is basically a big architectural hoedown, where Dave and a few other architects will get together and throw around ideas publicly.

That's right, publicly. And he plans to make public input an integral part of the creative process, which means you can actually put in your own two cents on the fate of our fair city.

And Your Point Is?

Unlike the proposed plan, which, in ways, resembles a square grid of selected building projects, Brennan's plan calls for a "central focal point that exudes a strong sense of place."  The site needs a visual and practical headquarters—that place that pops into your mind when you imagine going there. Brennan says such a point is, "essential to any successful social environment." It's sort of like that place in every amusement park where you map out what you want to ride before you head in. "This public gathering space could be used for small concerts, holiday celebrations, community events, etc…"

While the proposed plan seems primarily geared toward space use and function, Brennan's plan includes more space for the human element. He'd create a "dense urban fabric similar to a downtown central urban district," and "strategically locate green space throughout the site, especially at the water's edge." Brennan is with laying out a memorable chillzone that will allow, not only industry, but fun and friendship, to bloom.

The proposed plan includes a lot of housing. Brennan is cool with that. But in his plan, industry comes first. Not only that, but the industry works with the housing. By suggesting that businesses (preferably local ones) go on the street level, with apartments on the top level (2nd floor), Brennan's plan creates a place that more people in the area can benefit from. Plus, it gives potential renters an attraction to actually live close to.

Brennan's plan says ex-nay, on the 'ansions-may. There's only but so much room down there, and mansionettes? Really? Public square? Or gated community? Do we really need a snooty row of cribs to further divide people at Erie's great new spot?

Brennan's plan suggests moving the proposed parking garage over an area of the existing Bayfront Convention center lot. That lot is rarely full. A double-decker lot would save space, plus, parking lots ain't all that sexy. And we all know that ain't Erie. Getting creative with parking would enhance aesthetics all the way around.

If there has to be a hotel, it shouldn't block the view of the bay—Erie's greatest asset. And since a local developer has already committed to building in the area, is there really a huge need?

Again, someone needs to address Erie's elephant problem. It's getting out of hand.