If you were interested in which amazing indie games came out last year, this is a good place to start. 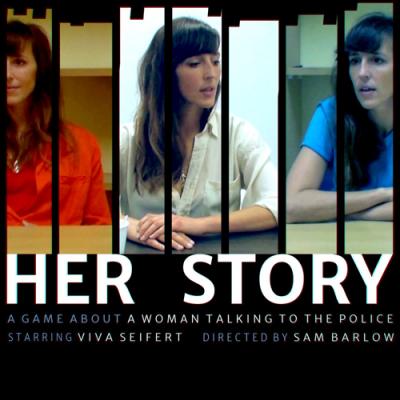 At the start of each year the largest game development conference takes place in San Francisco's Moscone Center. The Game Developers Conference is where the industry gathers to share lectures and to celebrate the games that help to lead the industry forward. It's also when the largest independent game award ceremony takes place: the Independent Game Festival (IGF) Awards.

This year, the IGF had over 750 games submitted. Of those, only 26 games made it into the list of final nominees for seven categories. So if you were interested in which amazing indie games came out last year, this is a good place to start.

The big winner this year was Her Story, created by Sam Barlow. Her Story won both the Seumas McNally Grand Prize and the Excellence in Narrative award. Available on both PC and iOS, players get involved in a police procedural, trying to find out about the disappearance of a man through a series of interview tapes of women named Hannah. Her Story is not your average game; there is no running and gunning. Instead, players use a virtual desktop to search through folders, watch short video clips, and leave notes as we piece together her story. It is a stark departure from what many people understand a game to be and offers something unique in the current climate.

In many ways, it's somewhat of a throwback. It's an FMV (full motion video) game, in a style similar to Riven or 7th Guest. More recently, FMV has been used mostly for camp. So seeing FMV being brought back from relative obscurity and treated with such reverence, and being married to a story that is truly engaging, has helped Barlow run the gamut of awards ceremonies winning a bucketful of awards.

Excellence in Design award winner is the hilarious and brilliant Keep talking and Nobody Explodes, by Steel Crate Games. Have you ever watched a spy movie, where the agent needs to defuse a bomb and has to radio back to headquarters for instruction? That's the gameplay of Keep Talking. Originally created for the Oculus Virtual Reality Headset, Keep Talking is a two-player game, where one has to defuse a bomb, and the other has a manual for how to do it. The game works because of the imbalance of information. Each player can't see what the other is looking at. Much of the fun comes from how we as humans communicate information to each other, especially while on a short fuse timer!

Subway planning zen puzzler Mini-Metro, by Dinosaur Polo Club, won the award for Excellence in Audio. In Mini-Metro, players draw commuter lines to try and keep up with a rising demand of commuters. This year's Nuovo award, which is designed to recognize the games that push the boundaries of what we believe games to be, went to Cibele by Star Maid Games. Cibele is a very autobiographical game about one of the creators, Nina Freeman. And finally, the Audience Award went to Undertale, which is a game I keep trying to play, but continue to bounce off of. Perhaps someone younger can tell me why it gets the amount of love it does, other than it has "dank memes." I mean, it seems good … I guess?

Every year the IGF offers a great representation of all the amazing games that came out over the past year. Only a few grab the top honors, but all of the nominees are worth your time. You can see the full list of nominees at IGF.com.