"Harry Potter and the Deathly Hallows: Part 2" has stormed the box office. And it's time to say goodbye to the teenage wizard. 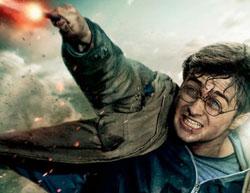 The magical film series that has kept audiences under a spell for 10 years and has made over $6 billion concluded Thursday, July 14 at midnight. Based on the best-selling series, "Harry Potter and the Deathly Hallows: Part 2," is an adaptation of the final book and has been described as a war film.

In November, "Harry Potter and the Deathly Hallows: Part 1" ended with house elf Dobby sacrificing himself for Harry Potter, played by Daniel Radcliffe. Harry, Hermione Granger, played by Emma Watson, and Ron Weasley, played by Rupert Grint, were on a desperate quest to destroy the Horcruxes that allowed Voldemort to remain immortal. Meanwhile, Voldemort, played by Ralph Fiennes, stole the powerful Elder Wand.

Viewers can look forward to battles, resolutions, and farewells.  Hogwarts, the series' primary setting which served as a school and safe haven for Harry and friends, appears nearly destroyed in previews, and the school is under siege by Voldemort and his minions. The main question comes down to survival – Harry Potter or Voldemort? The primary trio continues their Horcrux search and joins their friends in a final showdown. Even in a magical battle, there will be casualties. Fans who have read the book know that many favorite characters do not survive.

The "Harry Potter" franchise has changed filmmaking forever. Series author J.K. Rowling insisted on an entirely British cast that ended up having both newcomers (Radcliffe, Watson, and Grint) and veterans from Dame Maggie Smith to Gary Oldman. Each actor effectively brought his or her character to life, like Robbie Coltrane's Hagrid, whose huge height was only matched by his huge heart.

The films remained faithful to their source material. Some plotlines could not be included (like the house elf revolution) and other details changed (like the addition of a dance between Harry and Hermione) but overall the filmmakers kept Rowling's story intact. While the films transported viewers to magical settings filled with exotic creatures and enchanted objects, the characters experienced common feelings from love and hope to loss and betrayal.

"Harry Potter" is difficult to classify but I would describe it as a coming of age story, a modern fairy tale, and a fantasy. It can resonate with everyone from current children to senior citizens.

by Ian McGinnity6/28/2011, 12:35 PM
It's summer and it's films galore. Resident movie critic Ian McGinnity is back with a new review and two recommendations.

by Ian McGinnity6/22/2011, 12:00 AM
Ian McGinnity reviews one movie and recommends two others. See what he's sending you to see this week.

by Ian McGinnity6/7/2011, 6:12 PM
Want to make tonight a movie night? Ian McGinnity has some suggestions for you.

by Ian McGinnity6/2/2011, 3:47 PM
Want to check out a flick but can't decide what to see? Ian McGinnity gives you four good options for the week.