Order authorizes reallocation of PPE, ventilators depending on localized needs 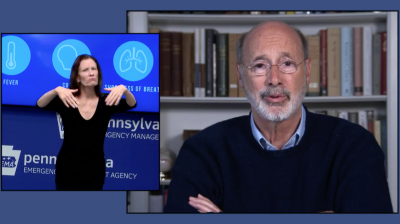 In his press briefing today, Gov. Tom Wolf announced an executive order allowing transference of medical supplies, in particular personal protective medical equipment (masks, shields, gloves, gowns, etc.) and ventilators between facilities. The measure was taken to allocate resources where they are needed the most, the governor explained, as the distribution of cases varies widely across the state. Particulary hard-hit areas include the southeast (Philadelphia and surrounding coutnies) and northeast (Lehigh Valley) regions — the west is more stable "but we are watching."

He also announced the integration of a hospital preparedness dashboard on the state's website, which provides a look at the total percentage of the state's medical resources in use — including ventilators and occupied beds. It is linked on the website's COVID-19 data page.

State healthcare secretary Dr. Rachel Levine reiterated that the state is doing all it can to buttress its capacity to treat COVID-19 patients, as numbers cotinue to inch up. However, both Wolf and Levine offered a cautious optimism as recent days have not seen an exponential rise in cases, suggesting that a "subtle flattening" of the curve may be underway. Despite this, Gov. Wolf warned that "we do not have this fire under control."

In total, the state recorded 1,680 new cases and 70 more deaths in the past 24 hours. There have been 16,239 cases in Pennsylvania to date, spread across all 67 counties. Of those cases, 309 have resulted in death.