Politics, religion, and the fights they bring. 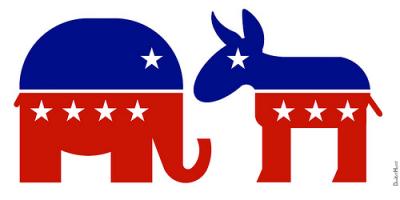 In 2008, a controversy erupted between Pastor John Hagee of the 19,000-member Cornerstone Evangelical Church in San Antonio, Texas, and William Donohue, the head of the Catholic League for Civil and Religious Rights. Hagee had made claims about Catholicism spawning a theology of hate toward Jews. Donahue said that these remarks were insulting to Catholicism.  The spat was patched up (at least temporarily).  But there has been a history of harsh words between Protestant and Catholic officials. It goes all the way back to Martin Luther's excommunication (1521.) Look back over 2,500 years of Western History.  Occasional riots preceded verbal spats, and extreme violence: occasional massacres, persecutions, inquisitions, and wars preceded riots. The young Mormon Church was violently expelled from eastern states where it was founded. But once it got control of Utah, its members were prominently involved in at least one massacre of non-Mormons (Mountain Meadows, 1857.) In May 1844, there was a riot in Philadelphia over whether only the Protestant Bible, or also the Catholic Bible, could be read in public schools. Thirteen people were killed. Even today, sporadic war between religious groups, frequently evangelical Christians versus Muslims, goes on literally around the world along the Tenth Parallel north of the equator (see the book The Tenth Parallel.) Here in the U.S. controversy occasionally erupts about the practice of some Mormons baptizing the dead. Some people of other faiths object that it's "attempted soul stealing."  Recently Maureen Dowd, (New York Times, "Is Elvis a Mormon?" 3.18.12) noted that Romney admitted to Newsweek in 2007 that he had engaged in that practice. He said he had done this sometime in the past, but not recently. Romney is a bishop of the Mormon Church. Meantime Rick Santorum has claimed that President Barack Obama's agenda is "about … some phony theology… not a theology based on the Bible..."

Why are religious differences such durable sources of division among humans?  A religion is a group of humans, larger than a cult, which has a church, a creed, and a code of morals. The creed is the dogma, sentences such as "I believe in one God…" etc. Or is it three Gods in one? Sentences of dogma do not claim anything that could be checked by observation with our senses. And history reveals that they are not subject to major revision or withdrawal from within the religion. The same non-verifiability is true of non-behavior implying claims about another person's pure states of mind, e.g., beliefs. There is no way, e.g., to verify or falsify claims that "X is not a Christian" or "X is a Christian," in his mind, in his secret heart of hearts. Unless of course, the claimant is a mind reader!  Religions emerged before nations. But their sheer size, in number of adherents and territory of prevalence, is so large that their church leaders must contend with others for domination of people, their labor, and resources to support their church personnel (land, water, crops, craft goods, trade, and temple offerings, i.e., pre-taxes.) That conflict is the source of their nation – like characteristics. It further sustains all forms of intolerance: bigotry, racism, sexism, and hyper patriotism.

Religions are inherently political. They are proto-nations, nascent governments. Their personnel (whatever called) judge and police their member's behavior. Proselytizing, seeking converts, sometimes by Evangelism, spreading their "good news," is their form of expansion. When applied to nations, it becomes "imperialism."  Like nations, they have had coercing forces, often explicit armies. Dominionism is the Christian religion's Manifest Destiny. Martyrdom is honored among Dominionists as is extreme valor in a national military cause. After all, it is refusal to switch loyalties, even under torture or death threat. "Onward Christian (Jewish, Muslim, etc.) Soldiers!"  Prohibitions on masturbation and homophobia: well, they won't produce cannon fodder, will they?

Creeds function like pledges of allegiance. That's a reason the most powerful atheist writers and science-based debaters can't faze religious witnesses by challenging them with any facts. They may affect audience members, but it's really at cross purposes to answer "I believe in…" with "Your belief is false, and here's why…"  In western societies (European), disagreements in creeds between religions often arose out of exegesis, interpretations of basically "the same" scripture.  But no factual inquiry can progress to settlement. When such disagreements became acute, schism, persecutions, inquisitions, even wars have occurred. Church rulers arrogated to their own authority not only dogma, but notions they develop about how congregants should behave, such as the 613 commandments of the Torah. These often go far beyond what creeds explicitly imply. Many of these in all religions eventually appear to laity as inconvenient, restrictive, irrational, exploitative of money, without survival value, anti-scientific, and sometimes even harmful.  How inconvenient and restrictive are some of these religious dictates? Here's an example: "Sickness is the Will of God, to be treated only by prayer."  Another is: "No one should ever have or perform an abortion under any circumstances." For a scientifically-minded person, to cite a fact, such as that 50% – 70% of fertilized eggs never implant," is simply not relevant to contradicting people who hold such a religious allegiance. In a secular democracy, all one can do is beat them at the polls in making law and hack out a compromise like Roe v. Wade.

Dictionaries define "bigotry" as a stubborn devotion to a church, or creed, and intolerance of any that differs. The word itself may even have originated in emphatic religious swearing, "By God!" Similar devotion to and intolerance of other races, nations, or sexual orientations gets other names: racism, jingoism, homophobia, etc.  Partisans, even extreme, just take the part of some cause. Bigotry is more virulent. Bigotry deforms one's intellectual character and damages one's potential moral character. Bigots have trouble with reality. They commit to un-provable dogma, and so can't acknowledge some facts. Bigotry stupefies people, substituting their strong emotions for reason and reality. Thus it impairs capacity for citizenship in a tolerant civil democracy. Bigots pridefully think: "I'm theologically correct; others are perverse in belief and morals, e.g., they sanction outright murder!"  Bigotry may play a large role in defeat of any Republican candidate in 2012.  People who claim others are "not real Christians," have "phony theologies" or demonstrate irrelevantly at funerals like the homophobic Westboro Baptists, or burn Korans, as well as dead soul baptizers, are "playing the religion card."  In motivating violent behavior, the religion card may trump even the race card. Our founders wisely wrote, "No religious Test shall ever be required as a qualification to any Office or public Trust under the United States" (Constitution, Art. 6 Sec. 3.)  For presidential candidates to make such theological, or mind-reader claims, publicly sets a divisive example. It opens the lid of Pandora's Box to a past fetid with insults and, earlier, riots, mass murder, inquisitorial torture, and genuine war.

It's possible that some of the remarks of candidates were meant for other purposes than to win nominations. American politics is also bad theater "entertainment." Masses of Americans freely contribute small sums of money to candidates, failing to realize that many small donations add up to a lot of influence, even money power. A lucrative career may await anyone, like Santorum, who gains such support. The career is that of being an avatar for the contributors' religious – political views. Look at the salaries of Fox newscasters, or better, the contracts of "hatertainers" Glenn Beck and Rush Limbaugh. But since it's divisive, bigotry ought to divide people and be politically vincible. Maybe many Mormons won't come out and vote, if Republicans eventually nominate two non-Mormons. Perhaps many Catholics won't vote for Republicans, if no Catholic like Santorum gets either nomination. Possibly a lot of Evangelicals will be unmotivated to vote by a ticket with a Mormon like "flip flopper" Romney at the top and a Catholic like Santorum for Vice President. We'll see.

by Robert Cogan8/8/2012, 11:00 AM
Robert Cogan says congressional gridlock is nearly completely phony. Do you agree?

by Robert Cogan6/13/2012, 7:30 AM
Supermarket Illusions: Scores of brands of cereal, made by very few producers. So many are already sweetened it's hard to choose unsweetened "original" ones. Pre-sweetened ones are deceptively "cheap," because you pay taxes to subsidize corn production.

by Robert Cogan5/22/2012, 12:34 PM
Ships and passengers, like the Titanic and those aboard, sometimes represent whole societies. Their wrecks represent apocalypses often caused in part by human moral failings.