Supermarket Illusions: Scores of brands of cereal, made by very few producers. So many are already sweetened it's hard to choose unsweetened "original" ones. Pre-sweetened ones are deceptively "cheap," because you pay taxes to subsidize corn production. 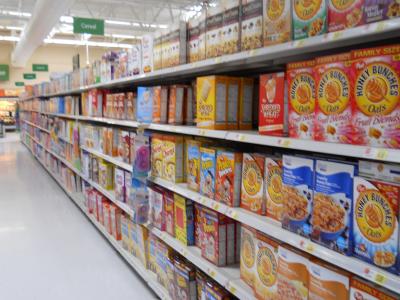 Part one of a two-part series

The May 16 issue of the Erie Reader (Vol. 2 No. 10) carried an extensive and illuminating feature story by Jay Stevens under the title "Raw Food Rebellion, The Raw Milk Controversy." The story highlighted several issues related to ideas expressed with the phrase "the free market" or "a free market." The specific issue of access to the market was illustrated with local color about an Edinboro farm family, the Showmans. They are allowed, under Pennsylvania law, to sell raw milk retail, but not to ship it across state lines under federal law. Theirs is a model farm. My wife and I buy eggs there confidently, because we've seen the farm, we know the family, and they keep free-range chickens.

Politicians have been bloviating hard about the virtues of the free market since the crash of 2008, which destroyed between $10 and $13 trillion of citizens' purchasing power. These for the most part were completely blameless citizens. They did not lie to take over-sized mortgage loans, nor gamble speculatively on exotic securities. I know the cautious, diligent type. I'm one. I had our life savings invested moderately, in a balanced, well-diversified portfolio. I nevertheless lost about $50,000. By lucky timing, the bulk of our savings remained after the crash.

So what's a free market and what will Free Market Fundamentalists (FMFs) seek to persuade us about it? A free market is supposed to be a system of exchanges of economic goods, on a voluntary basis, undertaken by each party because they expect some good for themselves from the exchange. Those who praise the operation of such a market insist that some of the great benefits of a free market arise from there being little or no government interference in the market. In such a market, they claim, prices are basically set by supply and demand. The opposite of a free market, they claim, is a command system, in which government plans what goods and services will be produced, their quantities and prices. They also stress the virtues of private property and claim that taxation is coercion.

I want to bring forth questions, possible criticisms of this theory. "Who, or What is 'free' in the 'free market'?" First, FMFs ignore the distinction between formal freedom and effective freedom. Formal freedom is the mere legal and physical capability of doing something. Effective freedom means having the actual capacity to do it. In a market system where everything has a price, the more unequally distributed income may be, the less effective freedom there is for increasing numbers of consumers. When a market system fails to produce even nearly enough of some recognized necessity at affordable prices, FMFs are disquieted to hear critics call it "market failure." Yet we are all familiar with it, e.g., in "housing fit for human habitation." (That phrase was used in a manifesto of demands by the Black Panther Party, decades ago.) And low-income housing is a failure of FMF all around the world (see the book Planet of Slums, by Mike Davis.)

There are experiences adult Americans have had that aren't usually explicitly connected to Free Market Fundamentalism. But I think they are powerful belief-influencers anyway. They are consumer experiences of shopping in supermarkets, or "just looking" in department stores, big box stores, or "hanging out" at the mall. If we deconstruct these experiences, we will see a foundation for FMF beliefs. The facts that cast doubt on them are less evident. Shopping experiences, unlike those of the natural world, are ones of a large number of discrete objects, of many colors, with a lot of them having very similar colors, shapes, and textures. The experience is almost entirely visual and auditory, less so kinetic, tactile, and olfactory. It's also an experience of numerous buyers and sellers unknown to us. The number of products and types of products, of buyers and sellers, can't help but create an impression of wealth, a surplus of goods far beyond what current shoppers need. The casual dress and slow stroll of shoppers further suggests some less-than-immediate needs, or wealth or leisure on their part.

But markets are much more controlled than free in the sense that choice is limited to the existing product mix. Like the song line, "You can't always get what you want." The raw milk case is one of many that show this. Marijuana is another. It shows that markets do not exist in the abstract, apart from societies with laws that regulate them. Regulation is inevitable. Most Americans know the facts. Marijuana is a mild intoxicant. Some people maybe have addictive personalities or brains or are in painful living conditions and will go from many first drug to another. Yet American society undertakes enormous expense to suppress freedom of individuals to market it. This goes into 800,000 arrests each year, extra police time, courts, prosecutions, prisons, guard pay, parole officers, etc. Simultaneously, at least two drug companies, Abbott and Solvay, are licensed to perform all sorts of chemical alterations on and sell it to the healthcare industry (under the name "Marinol.") Prohibitions and subsidies illustrate how mythical is the notion that prices are determined by supply and demand.

To be continued June 27

by Robert Cogan8/8/2012, 11:00 AM
Robert Cogan says congressional gridlock is nearly completely phony. Do you agree?

by Robert Cogan5/22/2012, 12:34 PM
Ships and passengers, like the Titanic and those aboard, sometimes represent whole societies. Their wrecks represent apocalypses often caused in part by human moral failings.