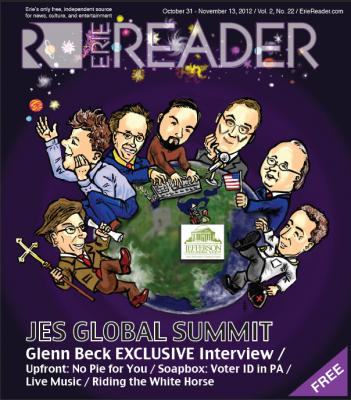 Here's your complete guide to the world-class speakers the Jefferson Educational Society has assembled for this year's Global Summit. For more information, visit www.JESerie.org or call 459.8000.

"On Paradise Drive: How We Live Now: The More Things Changes The More They Stay the Same "

Brooks is a regular columnist for The New York Times, political analyst for PBS' "News Hour" and NPR's "All Things Considered," and author of several books including "Bobos in Paradise: The New Upper Class and How They Got There" and "The Social Animal: How We Live (And Always Have) in the Future Tense." He's written for the Wall Street Journal and The New Yorker among other noted periodicals, but got his start as a Chicago police reporter. Brooks is the voice of the center-right in politics, and often wrestles with sociology, the American way of life, culture, and the future of the country.

"A New Definition of Religious Freedom: The Fraud of Fundamentalism"

Lynn is the executive director of Americans United for Separation of Church and State and the host of "Culture Shocks," and a long critic of the rising political power of the religious right and an advocate for preserving religious freedom through the separation of church and state. Lynn was born in Harrisburg and raised in Bethlehem, Pa.

"The Future of the Republican Party"

Currently working as a political analyst and op-ed columnist, Rove was the former chief adviser and Whitehouse Deputy Chief of Staff to President George W. Bush. Born on Christmas Day in 1950, Rove has been a gift to the Republican Party as its architect of its recent strategy, and electoral successes. Nicked named "Boy Genius" and "Turd Blossom" by Bush, Rove in 1970 stole the campaign letterhead of Democrat Alan Dixon, then running for state treasurer in Illinois, and sent out invitations to homeless Chicagoans offering "free beer, free food, girls, and a good time" at Dixon's headquarters.

What his critics say: "John Gibson of Fox News says that Karl Rove should be given a medal. I agree: Mr. Rove should receive a medal from the American Political Science Association for his pioneering discoveries about modern American politics. The medal can, if necessary, be delivered to his prison cell."  -- Paul Krugman

"Where Do We Go From Here: Picking Up The Policy Pieces In A Dysfunctional Political System"

Ornstein is the preeminent observer of American politics, writing a weekly column, "Congress Inside Out," for Roll Call, the online newspaper for Washington D.C. insiders, and co-directed the conservative American Enterprise Institute's election reform project. Ornstein has written or co-authored a number of books critical of the nation's political partisanship and Congressional obstructionism, including "The Broken Branch: How Congress is Failing America" and "Even Worse Than it Looks: How the American Constitutional System Collided with the New Politics of Extremism." Ornstein is a friend of Minnesota Senator Al Franken and appeared in Franken's 1999 political satire, "Why Not Me?" as campaign manager for a fictitious Franken presidential run.

What his critics say: "I know Norm Ornstein and [co-author of 'It's Even Worse Than It Looks'] Tom Mann. They are ultra, ultra liberals." -- Mitch McConnell

Kirshner is the Harvard College Professor of Astronomy and Clowes Professor of Science at Harvard University, and a contributing researcher to the 2011 Nobel-winning team that discovered the expansion of the universe is actually accelerating. Kirshner's book, "The Extravagant Universe," is a gripping account of the discovery. More astounding still is that the Harvard astronomer is likely the only person in Boston that likes the former manager of the Red Sox, Bobby Valentine.

What his critics say: "Do you think you're smarter than Einstein?" -- Robert Kirshner's mother.

Dying Well In America: Giving And Getting The Best Care Possible Through The End Of Life

A doctor of medicine, Byock is the Director of Palliative Medicine at Dartmouth-Hitchcock Medical Center in Lebanon, New Hampshire. Byock also helped found a hospice-care program for the indigent in Fresno, California, and the Missoula Demonstration Project in Montana that researched the experience of dying people and their families in an effort to improve palliative care nationwide. Byock also wrote books on palliative care -- "Dying Well" and "The Four Things that Matter Most" -- that are used in counseling patients and families to navigate end-of-life care, and his most recent book -- "The Best Care Possible" -- is an argument for transforming the nation's healthcare system to deal with a crisis in end-of-life care.

The Votes Are In: What's Next For American Politics?